COE raises the number of provinces on alert to 17; some 75 people have been relocated due to rains 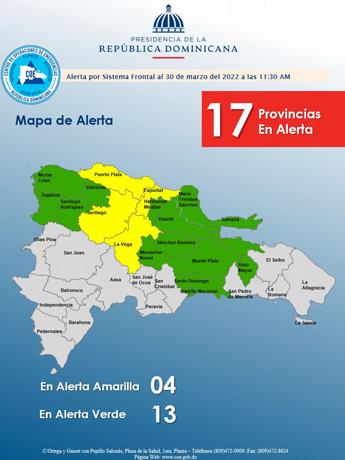 Provinces on alert for rainfall in the Dominican Republic. Map released by the COE.

Santo Domingo, DR
The Emergency Operations Center (COE) raises the provinces on alert to 17, four of them on yellow, due to the rains that will prevail during the day.

Likewise, authorities urged operators of fragile and small boats on the Atlantic coast to navigate with caution near the coastal perimeter and not to venture out to sea, due to wind and abnormal swell, from Cabo del Morro to Cabo Francés Viejo.

According to the National Meteorological Office (Onamet), a near-stationary frontal system that remains over the country is causing scattered downpours to continue in several towns of our territory.

By this afternoon, there will be a significant increase in cloudiness and heavy downpours accompanied by thunderstorms and wind gusts that will be more noticeable over the north, northeast, southeast, southwest, and the central mountain range.

The weather conditions of the last few days have caused 75 people to be moved to safe areas after 15 houses were affected.

The heavy rains of the last few days have caused urban flooding in the National District, such as in the case of the Los Girasoles sector.

While in Puerto Plata, specifically in the municipality of Yásica, the overflowing of the river of the same name the community obstructed the bridge, cutting off the communities of Los Martínez, El Mango, Los Pérez, and La Piragua de Yásica.

Traffic was also partially affected towards the communities of Los Bonilla, Rincón, and Bellaco, of that province due to the overflowing of the Bajabonico river, cutting off those sectors. In addition, the downpours caused urban flooding in the following sectors: Verdun, Villa Islabón, La Cuchilla, Vecindad de Juanita.

Also, due to the overflowing of the San Marcos River, traffic was partially affected in the communities of El Corazón and Loma de la Bestia.