A putrefied lagoon on the side of the Duarte highway 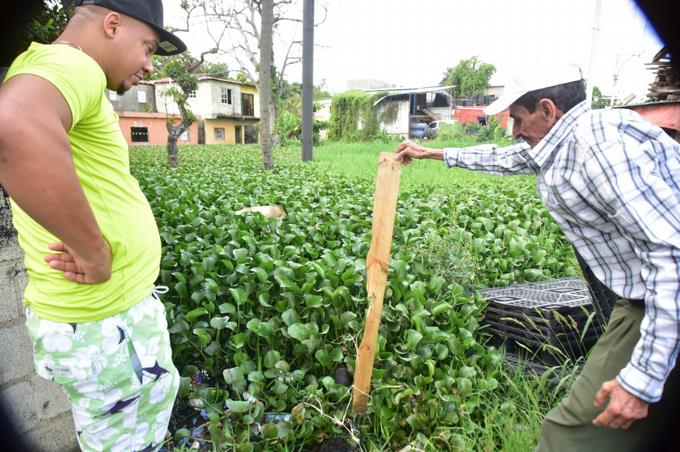 Santo Domingo, DR
Hidden among the weeds, debris, and the houses of families who have had to abandon their residences because of the contamination, a 100-meter lagoon of putrefaction has emerged on the side of the Juan Pablo Duarte highway.

The accumulation of sewage has expanded to such a level that those who still live nearby must ask permission from their back neighbors to reach the street.

“They let us go out because all those houses are taken”, said Enrique Cid, a 73-year-old man who, together with his wife, had to give up the entire first floor of the house and move to a “pensioncita” that they built.

“I live there (pointing with one hand, while holding on to a stick to avoid falling into the water), and right now you go to my house and there is water inside the house lying on the floor,” he revealed.

Waiting for the authorities

The lagoon, as the residents of Las Cayenas, at kilometer 22 of the Duarte Highway, call it, “is not a new problem,” some of those interviewed by this media stated that it is already seven years old, approximately, and is the result of the neglect of the municipal and governmental authorities.

They indicated that they have met “a number of times” with the representatives of the La Guáyiga municipal board in the municipality of Pedro Brand, and the result has always been the same; “they do nothing”.

“Mayor Mirtha Pérez comes there all the time and does absolutely nothing,” said José Luis, who added that she only shows up to have a store in the area remove their merchandise from the sidewalk.

“She comes for that, as if that were more important than this (referring to the lagoon),” he pointed out.

During the visit of a team of journalists from this newspaper, several residents agreed that “the worst part” is not the smell nor the pollution that comes out of the lagoon, but that “since it rains, it gets flooded.”

Ricardo, who acted as a guide, said that none of the toilets in Las Cayenas flush, so they have to “be doing maneuvers” and “when it rains it gets worse.”

Meanwhile, José Luis pointed out that “everything becomes a mess.”

“There are serious problems,” he emphasized.

With water on their chests

One of those who had to live through the anguish of sleeping and risking being covered by water or staying awake to run was Sid, who testified that he, his wife and neighbors have been sheltered three or four times.

“There was one time when even I was scared myself because the water came up to my chest,” he recalled while noting that he “doesn’t heal from a flu” because of the stagnant water.

In the proportion in which “the lagoon” is located, the lilacs, known to invade every now and then the waters of the Ozama and Isabela rivers, have already been produced.

This type of aquatic plant is typical of freshwater and, according to some experts, is the result of water pollution.

Sanitation is a big urban and rural problem in DR. The society consumes too much and there are no space to bury it!