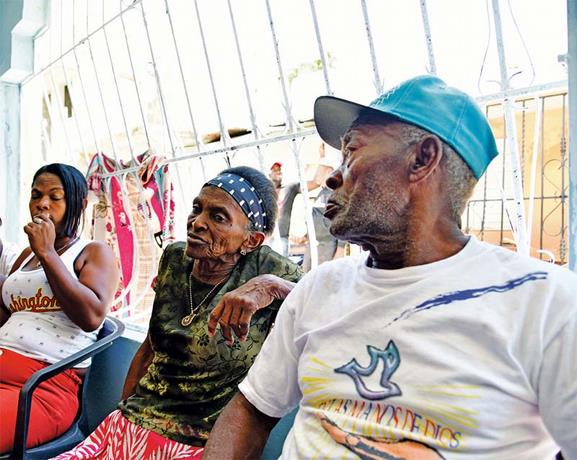 Santo Domingo, DR
For the married couple José Lorenzo, 87 years old, and Eusebia Maldonado, 70 years old, everything was fine in their humble home; they lived in complete peace and tranquility. Until one morning, they were forcibly removed by the military without compassion, pity, or empathy.

One of them said, “Hit the house with the shovel,” Doña Eusebia explained.

Even though they told her that they had not been notified, they destroyed the house above them, damaging their belongings right under their noses; the little they had achieved through years of effort, longings, and dreams were destroyed in a matter of minutes and to this day the elderly have nowhere to live and no means of support.

“We had to sleep wherever the night fell for a couple of days, until a neighbor caught us and then we came here and we also have to leave,” Eusebia added sadly.

José Lorenzo has dedicated his whole life to fishing; his boat had to be abandoned in the river.

“This is the only thing I have always done, I saw that fishing was beautiful and I liked it, and the cockles taught me, I loved it, and I learned it, that is my life, I live from weaving nets and fishing, that’s all,” José Lorenzo said with melancholy while making a fishing net.

They say that after such an abrupt intervention, they have sleep problems and anxiety, and it is even visible that they are going through a process of malnutrition.

The Executing Unit for the Resumption of Neighborhoods and Environments (URBE) had wrongly evaluated Lorenzo Maldonado’s house, including a second house belonging to Andrea Lorenzo Maldonado, one of José and Eusebia’s daughters, who had her home above her parents’ house.

“They told us that the house appeared to be made of wood and zinc, which was not the case, because they told us that any eviction to us was stopped because the house had to be reevaluated again, in two days you don’t raise a house from nothing, as they now want to say,” expressed Andrea.

The situation with Andrea and her two sons was barbaric; the oldest of her sons is Victor, he is 12 years old, and without knowing that when he came home from school, he would not have a house, he went to the remains of what was his home and was verbally and physically assaulted.

While hours before Leandro, Andrea’s youngest son, the little boy was sleeping peacefully in his little house, they began to demolish the structure with the infant inside, which made Andrea defy the military fury and take her son in her arms.

“When I saw that they did not let me take out my little boy who was asleep inside, I felt something and I did not care anything, when the big one came home from school they even hit him because without knowing he was going to go home, they forgot that they were innocent children,” recalled Andrea Lorenzo.

Emilio José Hernández, who has a barbershop as an enterprise, was greeted by the sight of a hole in the wall when he went to open the premises. Without notifying him that he would be evicted from his barbershop, they began to tear it down without his presence.

The whole process of Emilio José was supposedly at a standstill due to the absence of a power of attorney that was in process since his spouse is out of the country.

“I came running when they told me, and I came to talk to them; even though the situation was hot, I was passive until they gave me the first blow and I defended myself, since my livelihood comes from that little place,” reported Emilio.

Stones, bottles, threats, and much more were what the young man experienced.

Disgraceful.There are so many ways to make life easier for the poor; but instead they are ‘bullied’as if they do not matter.