The cold cold, refreshing drink with which Don Francisco has made a living for 24 years 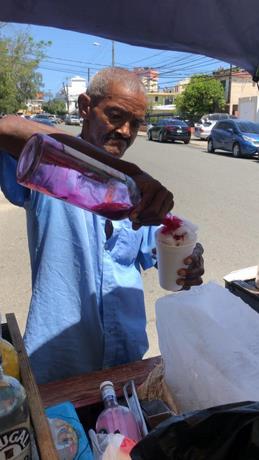 “Coco, pineapple, strawberry…” is heard behind a tricycle loaded with bottles with a mixture of flavors and colors, near the Red Cross, in the Miraflores sector of the Dominican capital.

It is Mr. Francisco Genao, who, with a smile, under the hot Caribbean sun, sells the traditional and refreshing drink known as “cold cold, yun yun or raspado.”

His skin is wrinkled, battered by the sun, but he remains kind to people and proud of his work for 24 years to support his family.

The heatwave affects his battered physique, something that Don Francisco ignores because the clientele that seeks to refresh and sweeten their palates with a drink sold throughout the country decades ago is increasing, but now it is rare to find one of these.

Don Francisco gets up early every day to leave his house in the Los Alcarrizos sector to the Villa Juana sector, where he keeps his merchandise and tricycle (he pays 30 pesos per day for parking). From there, he goes to buy syrup, bottled water, fruit, and ice in one place and then pushes his three-wheeled vehicle to the point of sale.

It is an informal business. Sometimes it goes well, and other times “more or less,” because when the brigades of the City Council of the National District are removing the vendors from the streets “I have to hide.” If he doesn’t work, he doesn’t eat, and when it rains, he can’t sell.

This is how the days go by. In a business that began when a cold drink was sold for five and ten centavos, it is now sold at 35 and 50 pesos, depending on the flavor.

Don Francisco raises his head and smiles for fear of poor sanitation when asked if the clientele has dropped. “That’s traditional, that doesn’t fall, one generation leaves it and another takes it.”