A hospital with few beds and many people demanding care 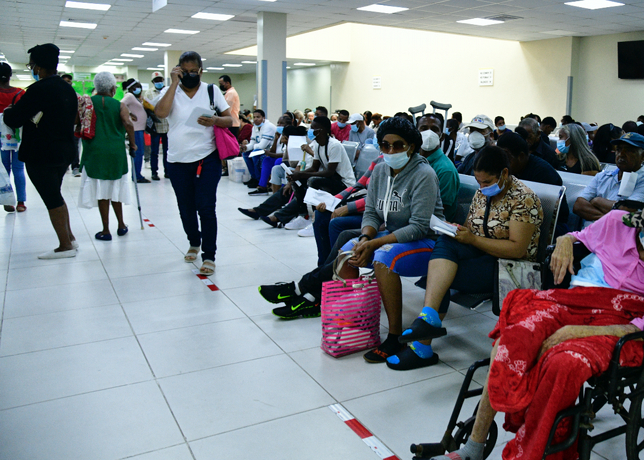 The high demand for services at the Moscoso Puello hospital exceeds the center's capacity.

Santo Domingo, DR
From the early hours of the morning, you can see the swaying of ambulances of the National Emergency System 911, the scuffle of security trying to contain the families of patients arriving with some condition, dozens of people on white chairs in the Diabetic Foot Unit taking their turns in order of arrival and the hustle and bustle of hundreds inside the Outpatient Clinic checking in to wait for the offices to open their doors.

Typical in any public health center in the country.

However, behind what appears to be “normal” and “typical,” Dr. Francisco E. Moscoso Puello Teaching Hospital, there are complaints, pessimism, and desperation from family members and patients due to the lack of beds, some medications, and the sensitivity and attention of many doctors.

“My mother had a stroke, we arrived at 9:00 at night from El Almirante three days ago and there are still no beds to admit her and they have her waiting in the emergency area,” said the family member with a tired tone, whose name was not revealed to the press for reasons of caution.

Although his mother is being medicated, he assures us that it is not easy to wake up three days standing up and uncomfortable because “the beds are full upstairs with inpatients.”

Also, José Antonio Díaz, who has a diabetic foot, said that they put a “little cream” on the entire wound when it is time for cleaning, and they always try to supply it, but “one has to buy everything that comes.”

“The hospital supplies it if one qualifies, but one looks for it outside because the quality is better than what is here. The cream is for scarring, it is called Silver Sulfadiazine and costs 2,800 pesos, which I don’t have,” he said.

Lack of beds
“There is never room here, it is always full,” said Patricia Salcedo, with tears, while confessing that her father had just passed away from complications in his stomach.

Salcedo, with impotence, stated that her father required to be taken to the Intensive Care Unit (ICU), but it was not possible due to the lack of beds, and they left him in the emergency room, even returning him home with medication on one of the days she took him.

“My dad needed to go to intensive care, but they never took him up because there was no room…they put him in an area by himself. Yes, he was comfortable, but he didn’t need to be there, he needed to be in the ICU, with more doctors and surveillance. They gave him permanent doctors in the last week of his life because I moved people and my influence so that he would receive the treatment,” he said.

Every day, 350 to 400 patients arrive at the Moscoso Puello emergency room. The 90 patients who come in with 911, 25 residents per shift, attend, according to the emergency physician in charge of the area Dr. César Sánchez.

However, the center only has 24 beds, ten stretchers, and two resuscitation beds in that area. “The demand for patients is very high in relation to the hospital’s capacity,” said the center’s Communications Department.

Frequent conditions
The main conditions people arrive at are cerebrovascular accidents, diabetic foot, heart attacks, asthma, allergies, alcohol or food poisoning. Patients also arrive stabbed, shot, and even a child with a burn said emergency physician Cesar Sanchez. The Moscoso Puello, located right in the center where more than 18 neighborhoods of the capital converge in the Luperón expansion, only has 24 ICU beds (of which 12 are for Covid-19) and 155 inpatient beds.

Medications out
“Sometimes medicine is needed and there isn’t any…for example, gauze and pain medication are needed. The doctors and employees work well, but they lack material and I have no resources for anything, I am alone in Guaricanos,” said Frank Rosario, an 85-year-old diabetic foot patient.

Like Rosario, Georgina Toribio, another diabetic foot patient, identified with what he said and added that she has six months of treatment left and has to pay for patches (the Kaltostat) outside the hospital since she does not have them at the cost of RD$800 per week.

For Toribio, this implies a sacrifice. His meager resources are not enough to afford the patches that he changes weekly depending on the degree of his ulcer.

“My ulcer is granulated. So I have about six months left with those patches.

For example, I put one on today, but if the ulcer gets wet, it has to be changed so that it does not pick up bacteria. If you leave it on, it inflates,, and those patches are expensive,” he commented.

During the morning, there were constant complaints about the prescriptions for medicines that patients’ relatives had to get outside.