1.6 ton of drugs seized in Peravia, ten days after seizing 1.1 in Punta Caucedo 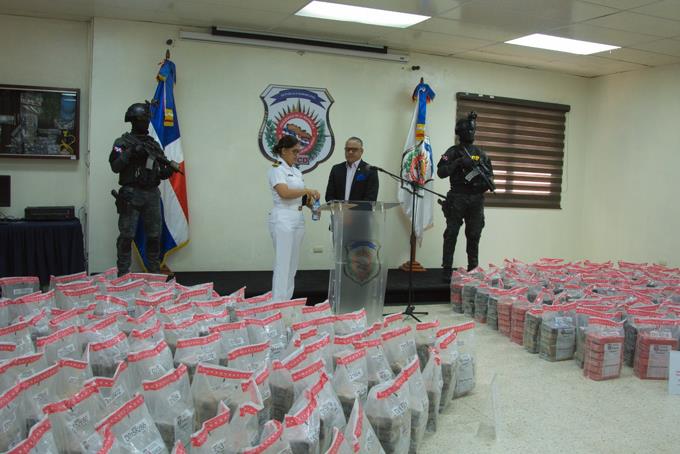 Santo Domingo, DR
The National Drug Control Directorate (DNCD) and the Dominican Republic Navy, supported by State intelligence agencies and members of the Public Prosecutor’s Office, confiscated 1,613 packages. Presumably, cocaine (1.6 tons) in two interdiction operations was carried out in the province of Peravia.

This is the second seizure of more than one ton in ten days since on the 3rd of this month; they seized 1.1 ton in Punta Caucedo.

Regarding this operation in Peravia, the DNCD informed that one was in a wooded area of the Quijada Quieta community of the municipality of Matanzas, of the referred province, after receiving reports that several individuals were trying to move an undetermined quantity of drugs.

Upon entering the area, the DNCD agents were shot at by several unknown persons, resulting in an exchange of fire, and no one was injured so far.

In the middle of the confrontation, the authorities apprehended four men and seized 21 sacks containing 833 packages of the substance. At the same time, the tactical reaction units activated the search for other individuals who managed to escape during the scuffle.

In the joint operation, a jeep, two motorcycles, a nine-millimeter caliber pistol, a communication radio, an antenna, a GPS, a compass, and four cell phones, among other evidence, were seized.

In a second operation, the authorities seized another 780 packages, presumably cocaine, in a maritime interdiction operation off the coast of the municipality of Bani, Peravia province.

The DNCD and the Navy, after receiving an alert that the occupants of a speedboat (Edwardian type) were trying to introduce a significant amount of drugs into Dominican territory, carried out an extensive operation several nautical miles south of the municipality mentioned above.

In this operation, two outboard motors of 90 Hp each, radio navigation equipment, three GPS, two cell phones, several bottles and tanks of fuel, and a cooler with water and foodstuffs were seized.

The Public Prosecutor’s Office and the DNCD are expanding their investigations to apprehend other members of these drug trafficking structures. At the same time, the detainees, in both cases, five Dominicans and two Colombians, will be brought to justice in the next few hours.

“The authorities have initiated an investigation to establish if the cases are related,” said the press release.

The 1,613 packages seized in the two operations are being sent under chain of custody to the National Institute of Forensic Sciences (INACIF) to determine the exact type and weight of the substance.

Damn! Everybody is aware that this powder built up the infrastructure in the Dominican Republic. Common knowledge. Go to Juan Dolio on the beachfront. What funded that grand development? With such a corrupt group at the top, it is no surprise these drug narco’s cash dumps have equaled development in these areas. If any money should ever be allocated to a country as a reward for its low drug activity, it is Haiti. If Haiti was heavily into the white powder, PAP would look like the Santo Domingo Malecon and Operation Octopus would be scripted in Creole.