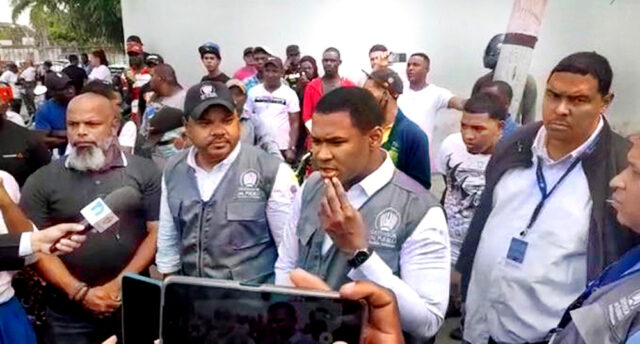 Santo Domingo.- President Luis Abinader has commented on the incident in which Ombudsman Pablo Ulloa and CDN 37 and Listín Diario journalists were assaulted at the vehicle compound known as the Canódromo, and stated that this action will have consequences.

The president said that regardless of the explanations given by the General Directorate of Transit Safety and Land Transportation (Digesett), those responsible for erasing data from the journalists’ electronic equipment should be investigated and prosecuted if appropriate.

“Regardless of the explanations given by @DIGESETT, the people responsible for deleting the cell phone data must be investigated and, if appropriate, prosecuted. These actions have had consequences in our government and so will this one,” he said.

Abinader said he supports Pablo Ulloa’s actions and all those that guarantee people’s rights and the fight against corruption.

“Just like the High Courts, we decided to support a non-partisan independent ombudsman who for the first time would defend the collective. Therefore, we support Pablo Ulloa’s actions and all those that guarantee peoples’ rights and the fight against corruption,” he tweeted.

The director of the General Directorate of Transit and Land Transportation Security (Digesett), Brigadier General Ramon Antonio Guzman Peralta, P.N. visited the Ombudsman, Pablo Ulloa, and his work team to apologize for last Monday’s attacks in the Canódromo.

Guzman Peralta acknowledged that members of his institution failed to respect the powers of the Ombudsman under Article 3 of Law 19-01 in the exercise of his ministry as a constitutional entity vested with full powers and faculties to carry out any investigation, even ex officio or at the request of a party, without prior notice, leading to the clarification of acts or omissions of the public sector and non-public entities that provide public services.

The Digesett director apologized to the Listín Diario newspaper and CDN Canal 37 news crews for their unjustified mistreatment of the journalists and press photographers, as well as for the damage caused to the media outlet’s work equipment.

He also ordered the transfer of the Canódromo staff and announced that an investigation had been launched by the National Police Internal Affairs Department.

Colonel Ysabelita de los Santos Perez, who was in charge of the Canódromo where the Ombudsman and members of the press were attacked, justified her actions yesterday, saying that she does not let anyone “give her a beating”.

“Many of the journalists who were there don’t know me. They should know that I am not a violent person, but I do not let myself be beaten by anyone, that is the only thing, no one is going to beat me, not an official nor anyone else”, she said in an interview with the Zol de la Mañana radio show.

Explaining why she left her office holding a golf club during the incident, she said that she always has this item and that “I am not going to go out to defend myself with my bare hands”. She added that she was not aware of the Ombudsman post until the incident and did not know who Pablo Ulloa was.

This incident reflects a culture held many people in various police authorities they are above the law, that they can do whatever they want because they have a uniform.

The justice system has to severely punish police miscreants who go unlawfully beyond their charge.

The President is forced to make examples of these Digesett people.

If Colonel Ysabelita de los Santos Perez seriously was not aware of the Ombudsman post there appears to be a general lack of education within the police force and her personally. The Ombudsman’s role has been publicized enough that she really should have been aware of it.

As to her comments regarding a “beating”, it seems to me that instead of taking a sensible approach and communicating with a superior, who might have known about the Ombudsman and his authority, she chose confrontation with a “weapon” in her hands which was bound to escalate the situation.

The police must be reformed immediately. Enough is enough.