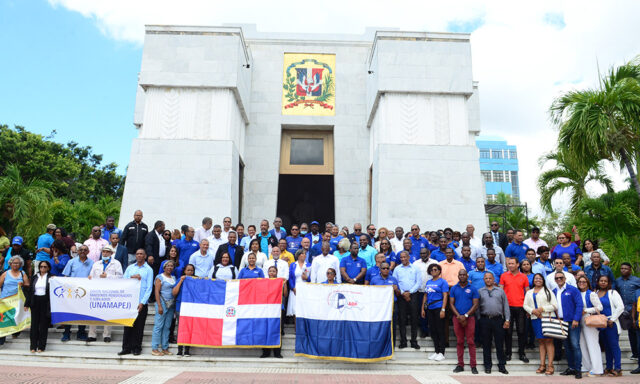 ADP representatives at the anniversary celebration. Image from hoy.com.do

Santo Domingo.- The president of the Dominican Teachers’ Association (ADP), Eduardo Hidalgo, expressed regret yesterday that the Ministry of Education (Minerd) is refusing to approve a 25 % salary increase for teachers, while minister Roberto Fulcar is appointing hundreds of promoters on RD$ 50,000 salaries.

While laying a wreath at the Altar de la Patria for the 52nd anniversary of the teachers’ association, the union leader criticized the minister’s actions because these new posts do not even appear on the institutional organization chart.

He informed that although President Luis Abinader was in favor of reconciliation in their dispute with the Ministry of Education, he has not yet met with the union to respond to their demands.

Hidalgo reiterated that they are open to dialogue, and therefore still hope that the president will hold a meeting with the union.

He informed that the teaching union’s national committee will meet next Tuesday 19, April to discuss the second stage of mobilization and to decide on the next steps to be followed in their campaign for the fulfillment of their demands.

He added that they will be implementing other measures to avoid disrupting teaching.

“We hope not to reach a standstill, what the public will see is creative and innovative mobilization,” he said.

Since last month, in addition to the salary increase, the Dominican Teachers’ Association has been demanding improvements for the ARS Semma and the Prepara program, payment for leaves of absence, completion of teaching shifts, and the formation of a teaching course tribunal.

Guess in simple terms the union president is saying money for teacher raises is going elsewhere, not in the pockets of the teachers where it is needed.

Teachers have always been understaffed, underpaid, and overworked.