Unions to get more than 25% of bus route profits 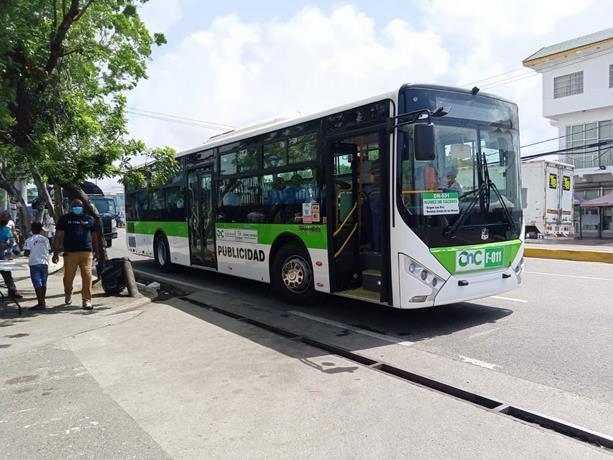 One of the new buses on the urban corridor routes. Image from listindiario.com

Santo Domingo.- Despite the fact that Article 43 of Law 63-17, which created the National Institute of Transit and Land Transportation (Intrant), establishes that public passenger transportation routes are state-owned, the State does not receive any share of the profits from the operations, according to the partnership contracts for the operation of the Núñez de Cáceres, Winston Churchill, and Charles de Gaulle routes.

These corridors were established through partnership contracts between Antonio Marte and Alfredo Pulinario, as owners of the Consorcio Nacional de Transporte (Conatra) and Grupo de Empresas de Transporte Mochotran transportation unions, with the associations that used to provide public transportation services in the streets where the new buses have been introduced, in addition to the resolutions for the operation of the routes created by Intrant in 2019.

“The operating license does not constitute property right or exclusive right of the corridor,” says Article 2 of Resolution 002-2019. However, the fifth paragraph of the partnership contract for the Núñez de Cáceres corridor, which was launched on January 27, 2021, states that the benefits or profits from the operation of the public passenger transport service will be divided “seventy-five percent (75%) of the net profits will go directly to the Cochonuca Transport Company, SRL.”

The remaining 25% will go to the Consorcio Nacional de Transporte, Conatra, “from the services derived from the present contract, for intermediation and related to the support of the company”.

In all cases, the partnership agreement states that the bus companies “may freely use [these funds] at the discretion of their representatives.”

When asked about this arrangement in several interviews, Hugo Beras, executive director of the Government’s Transportation Cabinet, said that the only role played by the Dominican State in the implementation of the new urban routes is monitoring, “follow-up, advice, support in the transformation and conversion of the system”.

“When it comes to privatization the State has never been involved in the public transportation system, mostly because of what is usual here, people are assigned to urban projects”, he said when interviewed on the Despierta CDN program on March 31.

He added that the new routes will be transparent thanks to the establishment of a trust for fare payments to be made using electronic cards. Passengers will use this card to travel on the Santo Domingo Metro, OMSA, and the Cable Car. These cards are acquired through the Dominican State.

it is an error to refer to them as unions. the old unions were dissolved and now they are private companies.