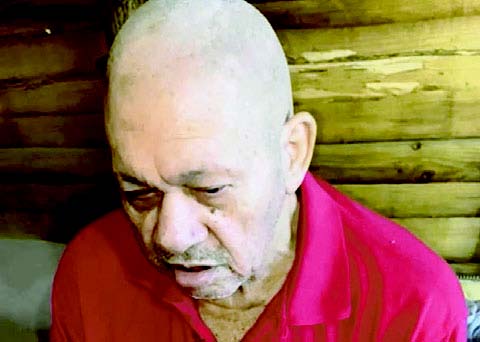 Rafael Antonio Ramos (Leonardo), 82 years old, who resides at 36 Duarte St., in the neighborhood of La Curva de Bubulao, Laguna Salada, Valverde – An elderly blind man who suffers from multiple health complications, asked for help from the Government, since, despite assuring that he has relatives in Santiago de los Caballeros, he has been living alone and abandoned for years in this municipality due to the charity of some neighbors.

He is Rafael Antonio Ramos (Leonardo), 82 years old, who lives at 36 Duarte Street, in La Curva de Bubulao, where he arrived several years ago for work reasons, but then he got sick with no one to take care of his health.

Gabriel Yovanny Soriano, a neighbor of Ramos, said that the older man had only received as help from the Government the Supérate card, and it was in the process of the pandemic, but that unscrupulous people made use of it without his consent, so it was reported to the authorities.

“The Governor’s Office of Valverde gave another card to Rafael Antonio Ramos and it will be put into effect next May,” said Soriano in declarations to Hoy reporters. According to Yovanny Soriano, the man with a visual disability and other health problems, told him that he has relatives in La Herradura and San José de Las Matas, in the province of Santiago and in the municipality of Cotuí, province Sánchez Ramírez, whom he identified as Francisca Ramos, Tina and Gerardo de León.

Given his health situation, Rafael Antonio Ramos can only hope for the solidarity of the authorities. To learn more about Mr. Ramos’ situation, please call the following telephone number: 809-228-2474.