The other greyhound track, Villa Mella 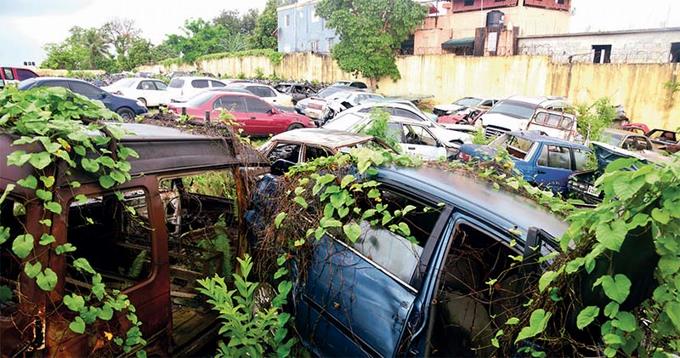 It is not a replica of the Monumental Avenue greyhound track, it is a view of yesterday at the Villa Mella detention center JORGE CRUZ

The Vehicle Retention Centers of the General Directorate of Traffic Safety and Land Transportation (Digesett) of the National Police have made the main headlines in the media in recent days.

This occurred after the incident that happened at the old “El Coco” dog track where agents attacked reporters from the LISTÍN DIARIO and CDN, in addition to the team from the Ombudsman’s office.

The outrage occurred when the Ombudsman, Pablo Ulloa, was preparing to enter the interior of the greyhound track to inspect its operation after citizens denounced that irregularities were being committed there in the processes at the time the user was going to take out your downtown vehicle located in the middle of Monumental Avenue in the National District.

These complaints not only stay there because in North Santo Domingo, right on Las Flores street is the Villa Mella Vehicle Retention Center, which is also subject to complaints of irregularities.

“That is an abuse there; you see that they put the poor motorists to give more than six trips; sometimes they return them even for a copy, which they can get from there, but what they like is to play with the other’s time, ”Luis Manuel, whose house is precisely in front of the Santo Domingo Norte greyhound track, told Listín Diario.

Through a visit made by reporters from this medium, it was possible to notice that inside it there are cars that seem to “have years” inside, due to the deterioration they present, but motors and vehicles were also observed in good “condition” and that they seemed recently driven to the place.

“I hope you guys hit that hard; those people have a mafia there and they remove the engines to remove them. You see that they grab a biker, with everything and his papers and they want to take him away, they don’t ask him or anything, they just ride him and that’s not how it should be. I can understand it when they are at fault or something like that, but on many occasions, it is not like that, and the poor affected drivers come out,” said Manuel Solano, who is a motoconchista and approached the reporters when he saw that they were taking pictures of the place, inside the gates since it was under lock and key with no one authorized to receive members of the press.

According to a document obtained from the Digesett, until April 13, some 33,585 vehicles were retained; those were distributed in 31,292 motorcycles and 2,293 “vehicles.”

Both the Santo Domingo Norte greyhound track and the National District greyhound track are just two of the vehicle retention centers that exist in the country; On the Coco Track, there are 22,552 vehicles detained, divided into 21,085 motorcycles and 1,467 vehicles, while on the Villa Mella there are 5,226 detentions, to be distributed in 5,128 motorcycles and 98 vehicles.

The “CRV Scrap” also appears, which according to an investigation by this newspaper, is a space that Digesett has where they only deposit vehicles that are considered unusable for the time they were held without being claimed. There are 3,074 motorcycles, and 585 cars piled up, occupying a space awaiting a decision on what to do with them, a responsibility that falls on the National Institute of Traffic and Land Transportation (Intrant).

There are also the centers of Independencia, Oriental, and Marbella, which together add up to 2,005 motorcycles and 143 vehicles retained. On a visit to the one located in Independencia, you will find cars and engines in much better condition than the other dog tracks.

Members of the Ombudsman’s office and the press were attacked by members of the Digesett when they tried to carry out an inspection in the face of complaints about the way in which the Dog Track is being managed. In the event, the Dog Track agents seized the camera and a cell phone belonging to this newspaper and destroyed the CDN equipment.

Both the camera and the cell phone were returned to the newsroom the next day, however, the cell phone had been “reset,” deleting all the documents it contained, including the photos and videos of the accident. President Luis Abinader announced that there would be consequences against those who acted in the act.

The Digesett communicated that same Monday the dismissal of Colonel Ysabelita de los Santos Pérez, who served as the commander of the Department of the Vehicle Retention Center and Lieutenant Colonel Hipólito Antonio Rijo Santana was appointed in her place; However, Ulloa was emphatic in pointing out that this should not be “the definitive measure.”

The bishop of the La Altagracia diocese, Monsignor Jesús Castro Marte, suggested that the Vehicle Retention Center of the General Directorate of Traffic Safety and Land Transportation (Digesett) of the National Police, installed in the old El Coco Dog Track, be dismantled after the incident that occurred around noon last Monday, where agents of the entity attacked the Ombudsman, Pablo Ulloa, and reporters from Listin Diario and CDN.

“We have to stop to analyze the incident of the Ombudsman and the DIGETT authorities, the dog track must be dismantled if we really aspire to an institutional framework,” Castro Marte said through his Twitter account.

It is recalled that the Digesett communicated that same Monday the dismissal of Colonel Ysabelita de los Santos Pérez, who served as the commander of the Department of Vehicle Retention Centers, and Lieutenant Colonel Hipólito Antonio Rijo Santana was appointed in her place; However, Ulloa was emphatic in pointing out that this should not be “the definitive measure.”