The secret place from where the revolution of ’65 was planned 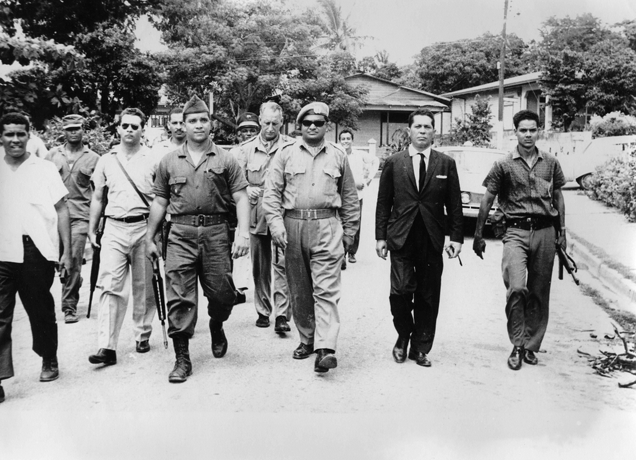 Senior military and police commanders joined the people during the 1965 April War. ARCHIVE

Santo Domingo, DR
At the confluence of San Martin Avenue and Oviedo Street, there is a “bomb” that, for the citizen collective, is nothing more than the sum of the general component of fuel stations.

However, this “bomb” was a center of debate and planning of constitutionalist ideas during the April War of 1965, a historical-revolutionary event that will be 57 years old tomorrow, Sunday.

Aviation officers and pilots, tank drivers, artillerymen and marines, some retired from the ranks for their beliefs, others still active despite what they advocated, with different ranks and military institutions, there, in the gas station “bomba,” they all met.

“Every time one of us was discharged for proposing that Trujillo be changed for a democracy, or that a group of officers propagated or spoke of democratic issues, that was different, we went to the gas station,” said professor and ex-military officer Jesús de la Rosa.

This citizen, who holds the rank of a naval captain, still keeps lucid memories of his participation in the April War as commander of troops of the Constitutionalist Army, besides being a member of the “bomba” gas station group.

The young people who met there were primarily officers from all branches sympathetic to democracy and found a safe barracks in that fuel pump station to plan how to return to the constitutionality of 1963.

More than half a century later, the place, which belonged to a relative of the then Captain Hector Lachapelle Diaz, still exists there, “at the corner” of Radio Television Dominicana.

“There we began to make development plans for the country, that is to say, a political local disguised as a gas pump; every time you went to the pump, who you met were discharged officers and those who were not yet canceled, but who wished to be discharged to meet freely at the so-called pump,” recalled De la Rosa.

The military was separated between those who supported the perpetuity of the regime and those who sought a new, more just, and democratic country.

The “bomba” was one of the various places where the latter met since the beginning of the conspiracy against the de facto government of Donald Reid Cabral because “when you are in a military conspiracy of that level, you cannot be fixed in one place; you have to change your position at every moment.”

Although they met in Güibia and Boca Chica, among other locations in Santo Domingo, the fuel store where Lachapelle started working, when he was taken out of the military ranks, was the most famous, thanks to its easy access and the convenience of its location.

Once the meetings were over, these young military men, aged 19 to 35, would put their plans and projects into action by placing them in strategic locations, where they would go to “check up on them” and “review.”

The latter implied doing actions that corresponded to what they were going to achieve in the search for the overthrow of Donald Reid and going out into the streets to fight with a pistol and a machine gun, the weapons they had been assigned when they joined the militia.

The decisive day arrived.
He recalled that on Saturday, April 24, they did not meet at the “bomba,” but in a restaurant in front of Independence Park to finalize the preparations for the revolutionary movement that would begin on Monday, something they had been planning since the overthrow of Bosch.

But the plans were overtaken when they heard that a brawl had started in a barracks, “between an officer and an attempted assault.”

On Saturday at noon, they had to leave in a hurry to meet at the base of the 16 de Agosto Military Camp, at kilometer 25 of the Duarte Highway. Before arriving there, he met his partner and compadre, Hector Lachapelle Diaz, with whom he went to report as planned.

The rest is history and one that De la Rosa described as “terrible.” The days of April 1965, which lasted until September of that year and continued with the second U.S. intervention of the last century, in every corner and street, one could feel the air of war, with civilians and military “armed to the teeth.”

A disgrace
The 86-year-old former combatant, who was in the midst of lamentation, said that he and his comrades had to face the war, said he had to face, with his military comrades these groups of young policemen who did not know the tactics and knowledge that they were taught in the military academies.

“A country in a state of war is a disgrace; one worries and would never want to see the country go through what they went through in that April,” he added.

De la Rosa added that if there were a new war, “the last one to pick up a rifle is me because I already picked one up, and I know what that is; a war does not lead to anything good.”

“All the military that went to the conflict today, we dedicate ourselves to things a little more dignified than going to a base to plot a fight against a people that did not have all the knowledge they should have,” he concluded.

Guillermo Pulgar Ramírez, Noboa Garnes, Jesús de la Rosa Canó, Luis Carlos Tejada González, were some of the officers who were part of the group formed by Lachapelle Díaz.

Divided military
After Trujillo’s execution, the Dominican armed forces, and society, in general, were divided in two. Some opted for the continuation of Trujillo’s rule, despite the dictator’s execution, while others were eager for someone to replace the satrap and the system he had established.

The “muchachos de la bomba” (the gas station boys) as they were also known, were included among the second group to organize the conspiracy that sought the return of Juan Bosch to power after the coup d’état of September 25, 1963.

“There were among us sons of generals; Colonel Caamaño was the son of a general; the only chief of the Armed Forces who was not Trujillo’s family was Caamaño’s father,” but the one they consider the hero of April did not sympathize with the regime.

According to the graduate of the first class of the Batalla de las Carreras Military Academy, Trujillo separated the military so much from the everyday civilians that the officers came to believe they were superior to the civilians. “That only they (the military) knew how a country should run,” he added.

“You spoke to people about the possibility of living in a better country and they didn’t believe you because you were military,” said the man who believes that perhaps there were more anti-Trujillo military officers than civilians who lost their lives at that time.

We lament that you took the corrupted democracy route! And the results speak for themselves.