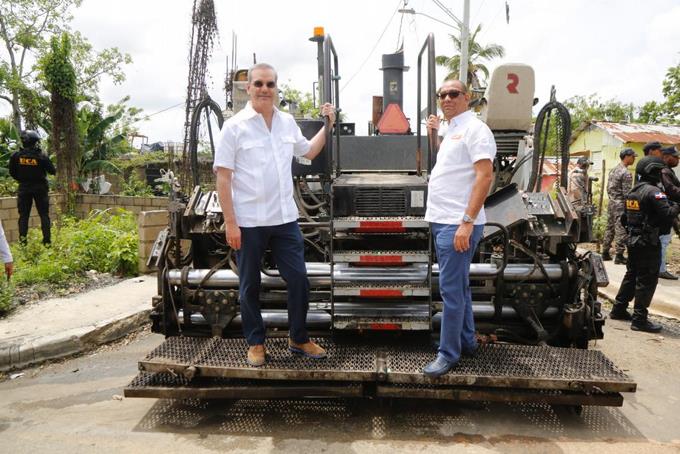 Santo Domingo, DR
The President of the Republic, Luis Abinader, made this Saturday a tour of different points of Los Alcarrizos, Herrera and Pantoja, where he inaugurated several works and supervised some activities.

The first item on the president’s agenda was to inaugurate the rehabilitation of the old building of the Regional Hospital Doctor Marcelino Vélez Santana, which will be converted into a modern Maternal and Child Unit.

He also announced a groundbreaking for remodeling the former IDSS maternity unit on Bolivar Ave.

The new unit is supposed to decongest and relieve the burden on the large maternity wards in the Metropolitan Region, the area of the country where most births are registered and where most of the high complexity patients are attended, reducing the maternal and neonatal mortality rates.

The Maternal and Infant area will have 36 beds, divided into a Neonatal Intensive Care Unit (NICU), Maternal ICU, and Pediatric ICU.

It will also have 59 hospital beds, 36 consultation rooms, X-rays, two areas for sonography, and Pediatric and Gynecological Emergencies, with eight and 12 beds, respectively, for triage, trauma, shock, and chairs nebulization and hydration.

Asphalting of Los Alcarrizos
Subsequently, the head of state also started the Asphalting Plan of the Ministry of Public Works in the sector of Los Cocos and Pueblo Nuevo in Los Alcarrizos.

Deligne Ascensión, Minister of Public Works, explained that this plan contemplates more than 200 million pesos in the three municipalities of Santo Domingo Oeste.

“Of these 200 million pesos, 60 million are invested in the asphalting of 23 streets in the municipality of Los Alcarrizos,” said Ascención.

Visit to Inespre market.
Abinader then visited the Price Stabilization Institute (Inespre) market in the La Fe sector, where dozens of people were stocking up on essential food products.

Abinader stopped briefly to greet and chat with them as they bought plantains, eggs, garlic, onions, and potatoes, among others. They also took the opportunity to request the completion of the construction of the primary school in the community.

Some 350 families of Los Alcarrizos will be impacted in the initial stage.

Abinader explained that with the “Opportunity 14-24″ program, some 140 young people, also in conditions of social vulnerability, will receive training in different areas and trades to start their businesses or enter the labor market.

Sidewalks, curbs, speed bumps, and Science Fair
As part of the tour, the President also visited the Villa Progreso sector of Los Alcarrizos, where he announced the construction of sidewalks, curbs, and speed bumps, a long-standing demand of its residents also impact La Esmeralda and Residencial Las Mercedes.

To conclude, the governor visited the first Science and Technology Fair of West Santo Domingo to ” foster scientific skills of university and high school students.”

There, the president reiterated his support for young people and asked them not to stop fighting for their dreams.