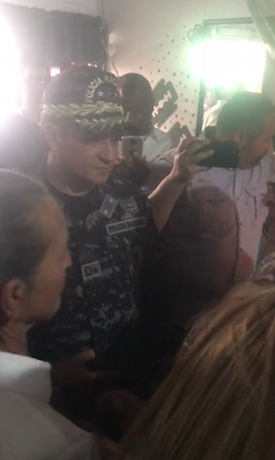 General Alberto Then listens to the mother and other members of the family of the young man murdered in Ocoa.

San Jose de Ocoa, DR
At the end of yesterday afternoon, a visit to the family of the young man murdered while he was in a local compound under police custody, the Director-General of the Police, General Eduardo Alberto Then, asked to extend the programming of a protest march for the fact, which which was accepted without objection by the organizers.

The Director-General of the Police, Major General Eduardo Alberto Then, arrived after 3:00 in the afternoon at the home of the family of young José Gregorio Custodio.

“They killed him at the police,” were among the first words that the victim’s mother, Milandina Custodio, said before General Then.

The high-ranking police officer listened attentively to the versions and complaints of the family, promising that what happened would be clarified and acted accordingly.

Previously, he had met with the governor, Oliva Castillo Aguasvivas, before whom he insisted that the measures to be taken would take place after the conclusive report from the National Institute of Forensic Sciences (Inacif) is received, which will shed light on the real cause of Custodio’s death.

There is a lot of work to do in regard to the police. I know in Guayacanes, young people are arrested on a regular basis for no reason other than the police want to show some muscle. It is clearly an abuse of power by the Juan Dolio police station. In the San Carlos neighbourhood Santo Domingo, a few minutes from El Conde, the heart of Zonas Colonial, there are at least three public crackhouses. All are located in the shadow of the National Police Station in same neighbourhood. Why are the police not closing these places ? You need to declare war on the HARD drug dealers such as cocaine & crack .You need the police to help the public – not the dealers.