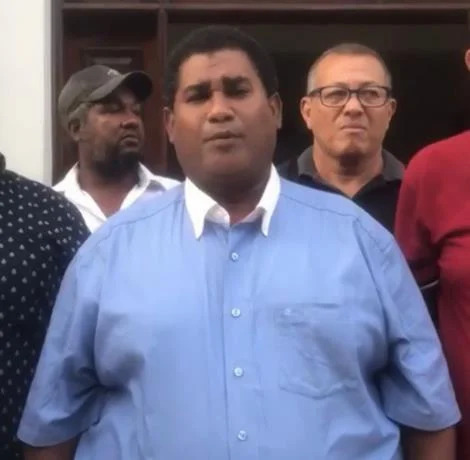 Santo Domingo, DR
Raquel Rivera, leader of the Coalition of Popular, Social, Feminist, and Environmentalist Organizations, denounced an alleged attempt by state security agencies to kidnap leader Osvaldo Brito when he was about to go to a Santiago television station to be interviewed.

The representative of the popular organizations affirmed that Brito was stripped of his backpack and that the alleged undercover agents “falsely” alleged that he was carrying a firearm.

Rivera said she regretted that the government of President Luis Abinader had already tried to prevent the strike from taking place instead of dedicating itself to finding a solution to the problems posed by the popular leaders.

“We are demanding a list of demands for the accumulation of the social debt with the people,” affirmed Rivera, while specifying that the convening organizations will analyze what happened and decide what actions to take.

She also assured that the population has supported in “great part” the stoppage of activities this Monday in the 14 provinces of Cibao, in the north of the Dominican Republic, assured its organizers, who claimed the “success” of the strike despite the “attempts of the Government to discredit it.”

“The big businesses in Santiago opened their doors, but their clientele was very scarce, while the medium and small businesses supported the strike, as they also did in other provinces,” affirmed the leader, who reiterated that the strike will end at six o’clock this Tuesday morning. However, it will be maintained for another 24 hours in Duarte province.

Likewise, they demand the completion of public works in the Cibao, such as schools, hospitals, and neighborhood roads.

“If you commit yourself to resolve something in the (electoral) campaign and then, when you get to the Government you do not do it, you are very irresponsible,” affirmed the leader.

It must be self kidnapping 🙂 This dude is protesting the inflation in the country that happens to be a worldwide inflation.

This “alleged undercover agents” attempt to kidnap smells of a scheme to make the Abinader government look bad and set up the supposed victim, Brito, more sympathetic to the public. Could these agents be shills employed by the organizations?