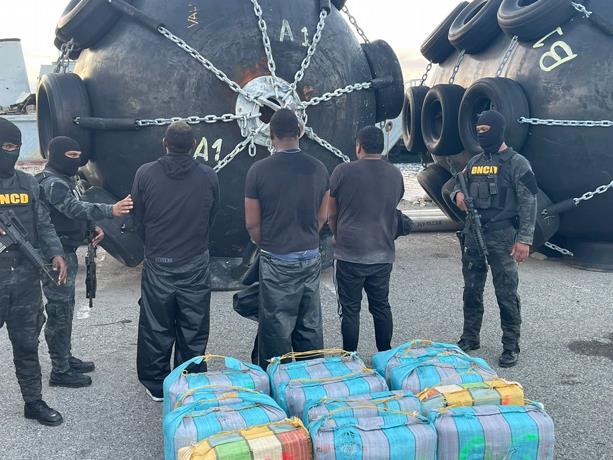 The 344 packages of cocaine seized on the coast of Peravia province. Photo: DNCD

The anti-narcotics agents, supported by naval and air units, after receiving an alert, gave chase to the occupants of a boat, who were reportedly trying to introduce an undetermined quantity of drugs into Dominican territory.

After several hours of the operation, according to the DNCD, the boat of about 23 feet in length was intercepted several nautical miles off the coast of Punta Salinas.

According to the authorities, three men (two Dominicans and one Colombian) were apprehended after boarding the boat, and 12 sacks containing 344 packages of the substance were seized.

In the joint operation, two outboard motors of 150 horsepower each were also seized,

The detainees are being handed over to the Public Prosecutor’s Office of Peravia province for coercive measures in the next few hours, while investigations are being carried out to determine if there are others involved in the case.

According to the DNCD, the 344 packages have been sent in custody to the National Institute of Forensic Sciences (Inacif), which will determine the type and weight of the substance in its analysis.