Garbage, an untamable bull for the mayor’s offices of Greater Santo Domingo 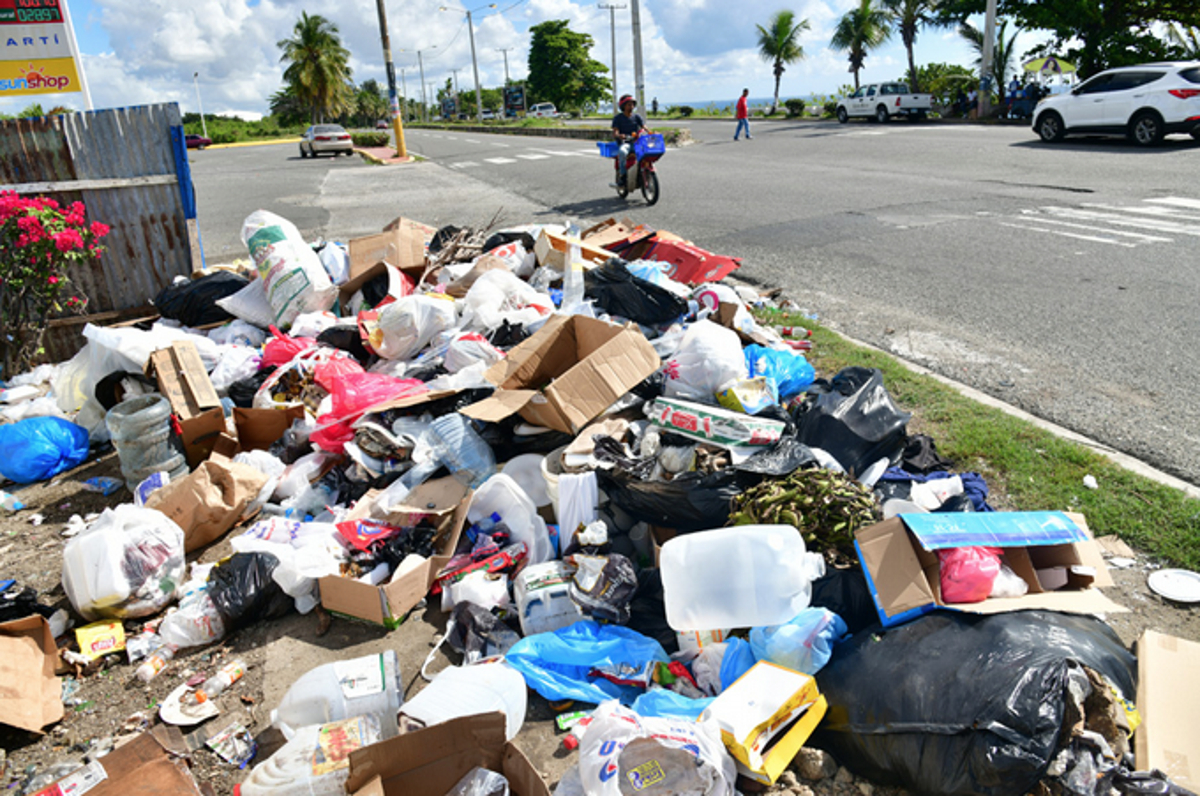 Garbage in the streets of Sano Domingo. File photo.

In four municipalities alone, 117,000 tons of solid waste are produced monthly, which some 782 workers collect with bare hands or with gloves that last less than a week due to daily wear and tear.

Santo Domingo, DR
On the palms of their hands, fingers, and feet, dozens of people bear the marks of what for years has been the objective, until now, “unattainable” for most the municipal governments; the segregation and proper management of solid waste in their districts.

According to data obtained by this newspaper, in these four municipalities alone, 117,000 tons of solid waste are produced monthly, which some 782 workers collect with bare hands or with gloves that last less than a week due to daily wear and tear.

Ezequiel Rivera, 48, goes out daily to pick up what others throw away without knowing what the bags contain, often open, with holes, or torn.

These factors, added to the speed with which the work units move through the streets of Santo Domingo, result in injuries that, although they hurt the efforts to keep the cities clean, because of all the waste that falls, they also threaten the physical integrity of those who go out to serve.

But while the accumulation of solid waste perforates the stability and harmony of the environment, through a process that many believe will take years, with each bag of garbage that falls on the pavement or is dragged from a tree, pedestrians and animals are also affected in the “here and now.”

Pieces of glass bottles, cans with sharp edges, and hard plastic are just some of the weapons hidden in these bags, generated by the municipalities and aimed right at their peers and environment.

Camouflaged to damage
In pieces of all sizes, glass containers were among the most common in the small improvised dumps that plague various spaces in any of the delimitations mentioned above.

In a tour conducted by a team of Listin Diario, after the routes of several garbage collection trucks, it could be seen how some workers collected with their hands the pieces of some bottles that could not be collected with the two pieces of a board usually used for these tasks.

Alfredo Nieves was one of those workers, and while he continued his work, he affirmed that this was normal. “Yes, people always throw away the bottles and that’s it,” he said.

Nieves, a 22-year-old working in this job since 2021 to help his mother with household expenses, indicated that he has only cut himself once, although he specified that it was not a deep wound.

Like that bottle that broke and hurt him, hundreds of them arrive at the Duquesa landfill.

The engineer Jorge Risek, who has 13 years of work in solid waste management and creator of the project “809 RECYCLE”, says that every month about 160,000 tons of glass are discarded and that companies that package their products in containers of this material have to reinvest over three million dollars a year for the loss of bottles.

Another that, as Nieves has seen his life marked by the damage that can cause the poor treatment of glass is Ricardo Reyes, the 21-year-old was not the one who suffered the injuries, but it was his turn to live in the skin of his older brother, Antonio Reyes.

“That (pointing to the foot), he was opened and gave him stitches and license,” he specified.

Just as harmful
Another material that abounds in the streets is plastic, which, although it does not affect the skin of these workers, does affect the food they eat, the air they breathe, and the water they drink.

Some 25,000 tons of plastic waste are generated monthly, which prevents the State from collecting more than four billion pesos, according to Risek.

This is unacceptable why is it just thrown on the ground , why not get huge container place it in a decent location and have the population dispose garbage in a orderly clean manner why does it have to look like this ? Come on we can do way better than this the way we keep our streets shows a lot keep it clean !

The government needs to get involved with waste management practices & public education.Accion ambiental Guayacanes has recommendations in this regard. See Facebook page.

come and look at boca chica. no garbage collection and when they do they do the very minimal and leave behind a mess. so now everyone just throws out their garbage where ever and the city is a mess.

What a third world dump