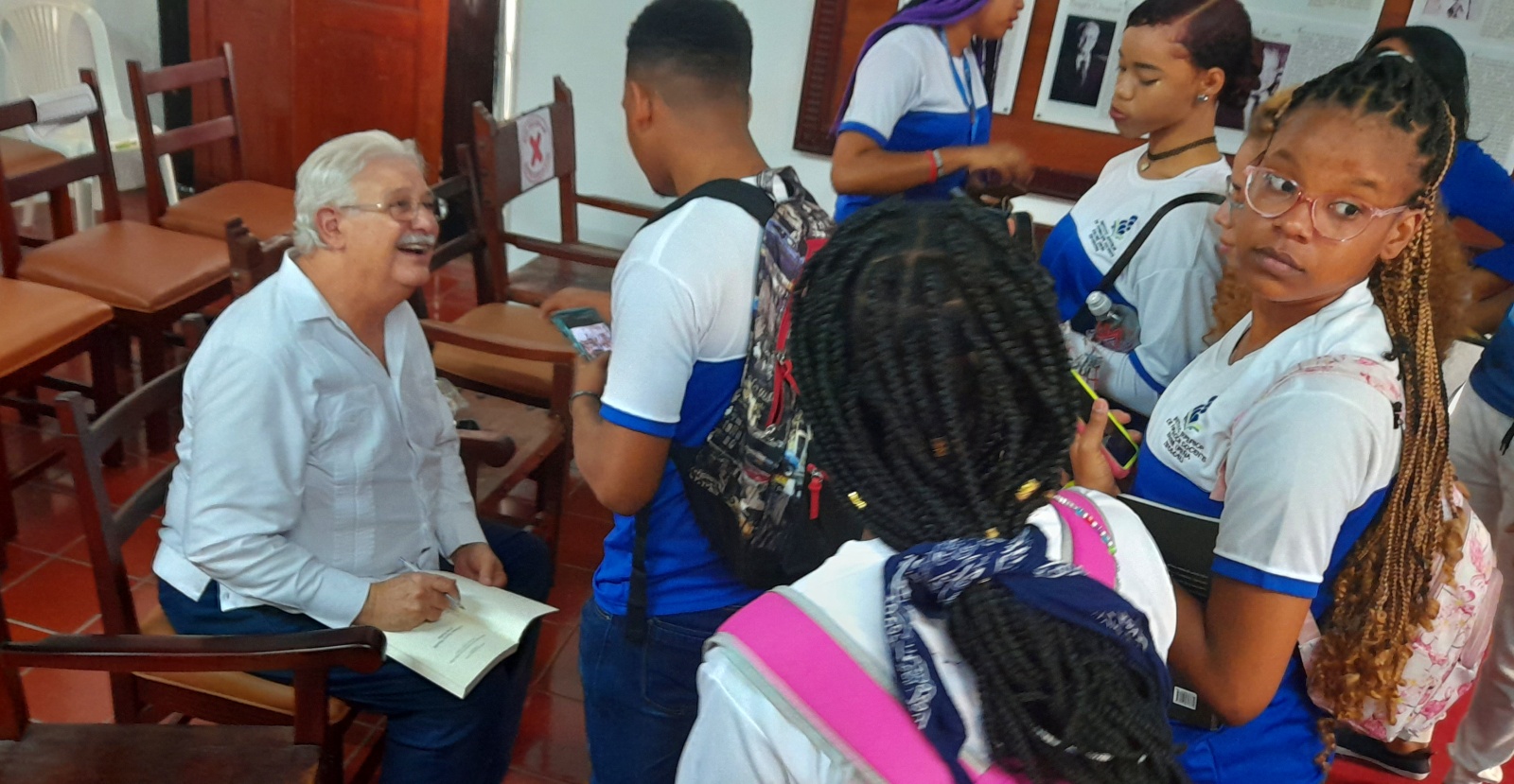 Puerto Rican historian and lecturer Dr. Jorge Rodríguez Beruff, one of the authors, at the book signing after the event. (Photo: Adrian R. Morales)

Santo Domingo.- The Salomé Ureña Higher Teacher Training Institute (ISFODOSU) presented “The First World War in the Antilles” at the Santo Domingo Book Fair 2022, a historical work with essays by specialists from several countries in the Caribbean region.

The book, coordinated by professor Xavier Calmettes, from the University of Avignon, and co-published with the Archivo General de la Nación -AGN-, was one of the projects –Label du Centenaire– selected by the official mission designated in France to commemorate one hundred years of the Great War and some of the most important battles that occurred during that event.

“Through the number of authors involved in this book, we are trying to put Caribbean history back on the map at this critical moment in 20th-century Western history,” said in the prologue Dr. David Gregory, visiting professor at ISFODOSU.

He added: “It is important to understand what happened during that period and the role of the Caribbean region, to understand the happenings that shape the events that will take place later with the Second World War, the Cold War and the insistence of the United States in intervene, not only in the Caribbean, but in Latin America.”

The book presentation was held at the Academy of Sciences of the Dominican Republic on April 26 and was chaired by Nurys González, rector of ISFODOSU; Jorge Rodríguez Beruff, Puerto Rican historian and co-author; Raymundo González, coordinator of the Social Sciences area of ​​ISFODOSU and representative of the AGN; and María Filomena González, teacher of the institution.

A necessary book
The book consists of three parts, the first of which deals with the impact of the First World War in Puerto Rico. The historians Charles R. Venator-Santiago, from the University of Connecticut; Rodríguez Beruff, Aníbal Sepúlveda Rivera and Silvia Álvarez Curbel, Permanent Academicians of the Puerto Rican Academy of History and Emeritus Professors of the University of Puerto Rico.

The second part deals with the incidence of the war in Cuba, which was analyzed by Susana León Abella, a researcher at the Institute of Cuban History; Xavier Calmettes, tenured professor at the University of Avignon, France; María Cristina Hierrezuelo Planas, professor at the Universidad de Oriente, in Cuba; and Jorge Renato Ibarra Guillart, Cuban historian and researcher, doctor in Historical Sciences and senior researcher at the Institute of Cuban History.

The third part has to do with the Dominican Republic and the French Antilles, and for this topic contributed Clément Pascal, First Class Badge, and Isabel de León Olivares, Dominican historian, teacher at the National Autonomous University of Mexico.

The essays gathered in the book show that the First World War represented a rupture in the internal evolution of Latin American societies due to its economic, political, cultural, diplomatic and intellectual effects.

“The First World War in the Antilles” contributes to filling a void around such an encompassing subject, because although the causes and consequences of this world war in Europe have been widely studied, not only from academic studies, but also from literary and cinematographic fiction, few authors have dedicated themselves to delving into its impact in other latitudes.

The 24th Santo Domingo International Book Fair is dedicated this year to Dominican writers Pedro Peix and Carmen Natalia. The “book festival” continues until Monday May 2 in the Colonial Zone of the Dominican capital.