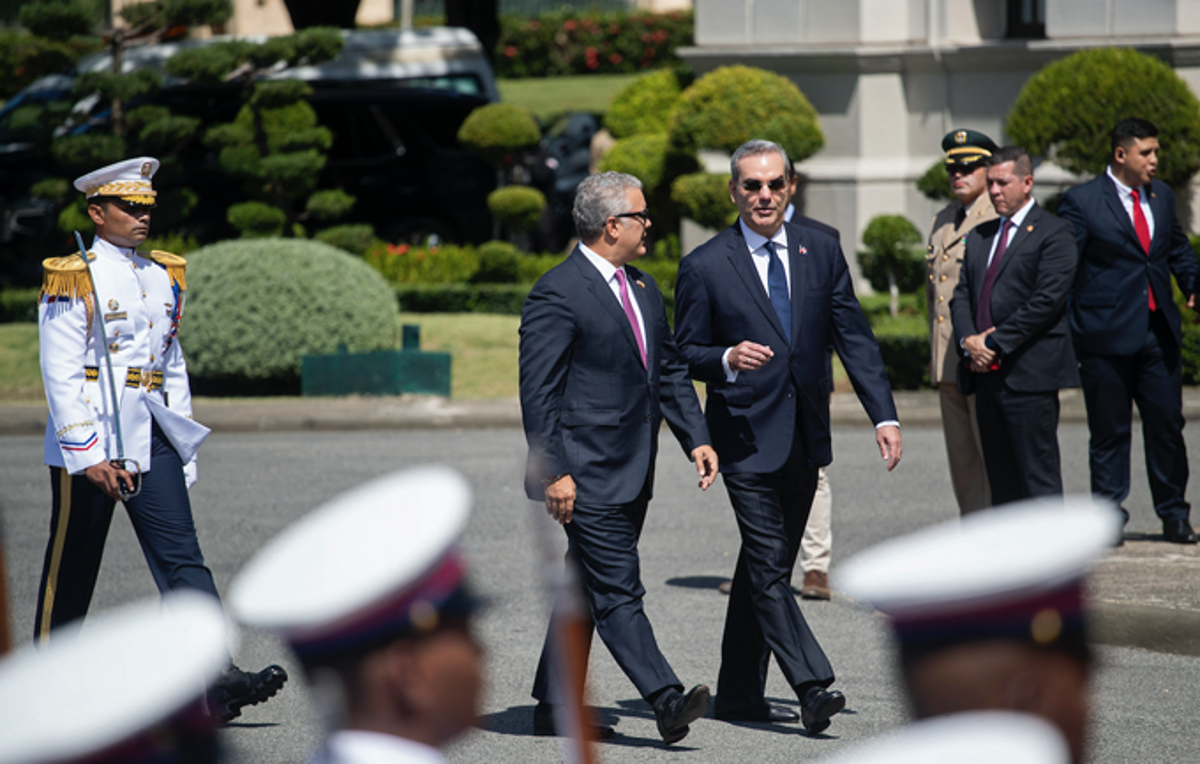 The presidents of Colombia, Iván Duque, and of the Dominican Republic, Luis Abinader, decorated each other during the official acts held yesterday at the National Palace. AFP/

Santo Domingo, DR
Under the radiant sun and in front of the steps of the National Palace, President Luis Abinader formally received yesterday his Colombian counterpart, Ivan Duque, who made an official visit to the country to “strengthen the ties of friendship, cooperation and economic development” between the two nations through six agreements.

In his speech after signing a joint declaration, President Abinader said that relations between the two nations would be more positive after the agreements.

Meanwhile, the South American leader said that the Dominican Republic would have the “unrestricted” support of the Colombian government to strengthen police reform and other investment and trade advances.

Duque also announced his commitment to support the “security strategy” of President Abinader and that he knew of his frontal purpose against organized crime and drug trafficking, “with results that are eloquent and speak for themselves.”

Abinader highlighted that since “there were problems in supplying coal for the Punta Catalina plants, due to supply problems, he called President Duque who helped them.”

Duque pointed out that what was done opened the doors for Colombia to play a fundamental role in the Dominican Republic’s energy security regarding the Punta Catalina plants.

“With our agencies and companies you will have an ally to increase sustainable production and make prices more affordable for Dominican citizens,” Duque said.

Signing of agreements
The heads of state signed six agreements, which were also signed by the ministers of the Colombian and Dominican Republic delegations.

The first agreement seeks to advance bilateral cooperation in the field of the hydrocarbons industry. The second establishes inter-institutional police cooperation to join efforts to prevent and combat crime and terrorism.

The third agreement is a memorandum of understanding on public administration and training.

The fourth is a letter concerning sports, with the objective of fostering their relationship in the field of sports, including baseball.

They also reached another agreement on migration to implement migratory mobility and information exchange mechanisms.

Military Honors
During the ceremony to receive President Duque at the front esplanade of the National Palace, the military honors corresponding to his high investiture were performed, which consisted of the presidential attention call, 21 artillery shots and then the interpretation of the national anthems of both countries.

Likewise, the rulers proceeded to the military review and the presentation of their respective delegations in the hall of the Council of Government.

Decorations
After the signing of the bilateral agreements, both presidents decorated each other.

The decoration awarded by the Dominican Government to President Duque was the Order of Merit of Duarte, Sanchez and Mella, in the Grade of Grand Cross Gold Plaque.

And the decoration granted by the Government of Colombia to President Abinader is the Order of Boyacá, in the Grade of Grand Collar. The official acts included a luncheon.

At the end of the events at the National Palace, starting at 3:00 in the afternoon, the Colombian President and his entourage visited the Altar of the Homeland, where they laid a wreath.

Then they went to the National Congress, where they were received by the presidents of the Senate, Eduardo Estrella, and the Chamber of Deputies, Alfredo Pacheco.

Return to his country
The president of the South American country arrived in the Dominican territory on Thursday around 11:00 p.m. at the José Francisco Peña Gómez International Airport of the Americas.

Duque was scheduled to return to Colombia last night.

wow, ask corrupt police, columbia to help our police. that will only end up with more abuse and corruption with our police.

COLOMBIA is how it’s spelled. It also has one of the least corrupt Police forces in the world.