Deaths of prisoners shock the country 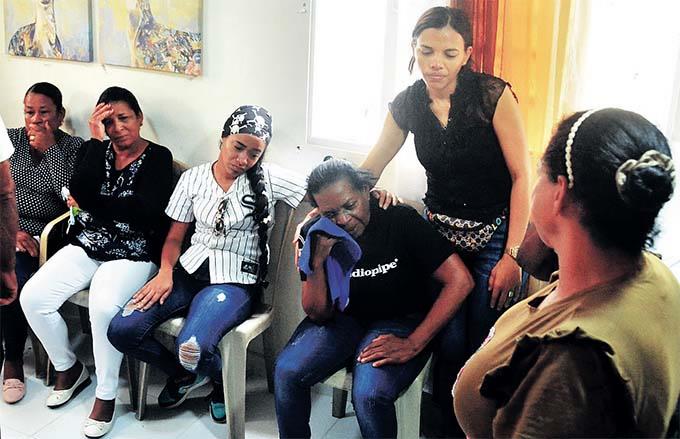 Relatives and friends of David de los Santos mourn inconsolably the death of their relative at the hands of the National Police while he was detained in the Naco expansion detachment, in the National District. LEONEL MATOS/LD

In 15 days, two young people have died after being detained by the National Police and taken to two detachments, in events that relatives attribute to beatings by police officers.

Aware of the death of a young man who was imprisoned in the police detachment in Naco, President Luis Abinader last night expressed his “dismay” at the crime and promised that, in his administration, “no case of this nature will go unpunished.” .

“As a citizen and president, I express my dismay at the death of young David De Los Santos, who was detained in the National Police,” Abinader wrote on Twitter.

The official added that “as in other cases, whose perpetrators are subdued and imprisoned , I guarantee David’s family and Dominican society that in my management no case of this nature will go unpunished, regardless of who or who is responsible.”

David’s death in the Naco detachment is added to the abuses committed by Police troops against the Ombudsman and journalists from Listín Diario at the Dog Track, five days later other agents violently detained a young man in Ocoa at dawn and They deliver the dying man to a hospital, where he died hours later and until now there is no official report about the police officers who tortured him or a forensic report on the cause of his death in the hands of the Police.

What have the National Police and the Public Ministry done in these three cases that have moved public opinion in recent weeks?

While public opinion shakes with condemnations of these cases, the Police report that the acting agents are “suspended”, the Ombudsman, Pablo Ulloa and the Institutional and Justice Foundation (Finjus) say that the facts are unacceptable.

In 15 days, two young people have died after being detained by the National Police and taken to two detachments, in events that relatives attribute to beatings by police officers and that the bodies show beyond any conclusion of a forensic study.

In both cases, they were healthy people who, after being detained and beaten, their bodies collapsed within a few hours.

The dead are José Gregorio Custodio and David de los Santos and similar circumstances. Captured in good condition , they are taken to the police and later reported that they perished.

The first, Custodio, detained in San José de Ocoa, in the south of the Dominican Republic, on March 17 accused of threatening his partner, died from the blows he received in the barracks, which has generated outrage, protests, questions to the police actions and demand for justice.

The autopsy is still pending, while relatives and community members brand the institution of the order as “murderous”, as they shouted at Custodio’s funeral.

His mother, Milandina Custodio, said that on three occasions she went to take her son to the detachment to eat and they told her that “he was sleeping” and then they reported his death.

The body was sent to the National Institute of Forensic Sciences (Inacif) for autopsy, whose results, two weeks later, are pending.

The reaction of the General Directorate of the Police was to transfer Colonel Santo Santana Vizcaíno, commander of the Department of Ocoa.

In this fact, the director of the Police, Major General Eduardo Alberto Then, promised to receive the results of the autopsy, and if they show that the agents were the cause of the crime, he will deliver them to justice.

Another prisoner in a coffin: David de los Santos

The most recent incident is David de los Santos, who died on Sunday at the Darío Contreras hospital, but was arrested in the Ágora Mall square, after throwing epithets at a client, which she understood were threatening.

He was in the Ensanche Naco Police detachment in Santo Domingo and the Police say he had “a mental crisis and said a few words to a lady, who felt threatened.”

Relatives say that the detachment did not inform his relatives of his condition and took him to the Francisco Moscoso Puello Hospital and then to the Darío Contreras Hospital, where he died. The version of the Police is that the young man caused the injuries that caused their death, but the family demands an investigation and punishment of those responsible.

The General Directorate of the Police ordered the suspension of the service agents in the Naco Detachment and to investigate the circumstances in which De los Santos died.

Both events have in common that they show the need for the plans and purposes of transformation and professionalization of the National Police, as clearly stated by the Executive Branch after the murder of young pastors Joel Díaz and Eliza Muñoz in Villa Altagracia on Easter Wednesday. from last year.

On the other hand, the media and communication networks reported on April 11 the incidents that took place at the El Coco Dog Track, when police agents dedicated to the retention of motor vehicles, forcibly prevented the Ombudsman and his team carried out an inspection, after receiving complaints of serious irregularities and abuses against citizens.

In these incidents, in addition to the use of force and the obstruction of the action of a constitutional body without any justification, Listín Diario denounced that the agents who intervened stripped their reporters of their equipment , and proceeded to erase the recorded information, which constitutes a very serious precedent of violation of the right to exercise journalism and the free expression of thought.

The executive director of Finjus, Servio Tulio Castaño Guzmán, considered it urgent that forceful responses be adopted in the face of these events, as a result of in- depth, expeditious and complete investigations, adhering to due process, so that they do not tarnish the progress made in recent months in the police reform.

“We call the attention of the corresponding authorities in the sense that several weeks after the events occurred, the INACIF certificate on the autopsy of the young man from Ocoeño has not yet been issued and the results of the investigation into the responsible for deleting the data of the Listín Diario teams”, emphasized the jurist.

The Inacif has two speeds

The one from Ocoa is not known

Although two weeks have passed and the Inacif has not reported the cause of death of José Gregorio Custodio , yesterday, a day after examining the body of David de los Santos, that entity confirmed that his death corresponds to a homicide.

The report notes that David died of ” head trauma caused by a blow, jolt, or explosive impact to the head or a penetrating head injury that disrupts normal brain function.”

There is a huge amount of work to do in regard to aiding the 50% of the population which includes 25% that have nothing. The poor are abused by the police which adds to their daily strife. Lots can be done such as making it easier to get an ID card instead of paying thousands to abogados. Improve the life of the poor and you will reduce the number of arrests.