They demand justice for David’s death before the square 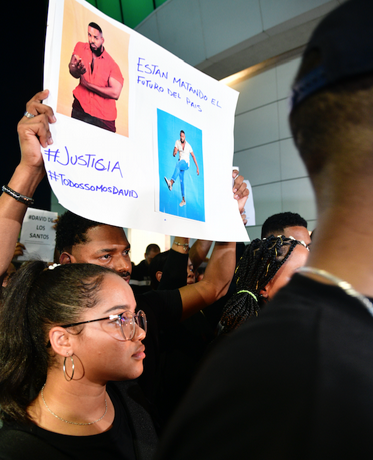 Relatives and friends of David de los Santos gathered in front of Ágora Mall to repudiate the crime. JORGE CRUZ/

They asked the National Police to present the lady that David de Los Santos allegedly offended, because in their opinion since she is a person with influence, they want to protect her.

With lit candles and banners in their hands, relatives, neighbors, friends, fellow students and colleagues of Professor David de Los Santos, gathered last night in front of the Ágora Mall shopping mall in a vigil to demand that the authorities clarify his murder in a police detachment.

Under tears and prey to impotence and fear, the young people shouted over and over again the slogans “National Police, stop murdering.”

They assure that they were the same law enforcement officers who murdered David, who has signs of torture on his body, according to the protesters.

The forensic report also states that he died from trauma and his death is considered a crime by his custodians.

They asked the authorities to present the lady that he supposedly offended, because in their opinion, since she is a person with influence, they want to protect her.

They described David as an exceptional human being, who thought more of his neighbor than of himself.

In fact, they highlighted that he had recently taken a geriatric massage course at the Technical Professional Training Institute (INFOTEP), because his desires were to set up a center to care for older adults who had ailments in nursing homes.

“His delusion was to be able to have a place to help the elderly. He gave English classes to children and adults, but he was also an athlete and now his goal was the elderly, ”said Mrs. Ana, who described him as a completely honest person.

The protesters questioned the actions of the National Police, in the sense that the version of events has changed.

They denied that David had mental or behavioral problems, as he had no enemies and was always willing to help.

His best friend, Luis de la Cruz, said that at the age of 23 living in a neighborhood he became a professional and was bilingual, but he continued to take courses to continue improving himself.

“My friend was taken from me. My friend didn’t hurt anyone and today you can appreciate it by the crowd here. He never hurt anyone,” he said under a sob.

On his side, Mr. César Ozuna criticized that a patrol went to look for him as a prisoner in a commercial plaza, just because of a call that someone made against him.