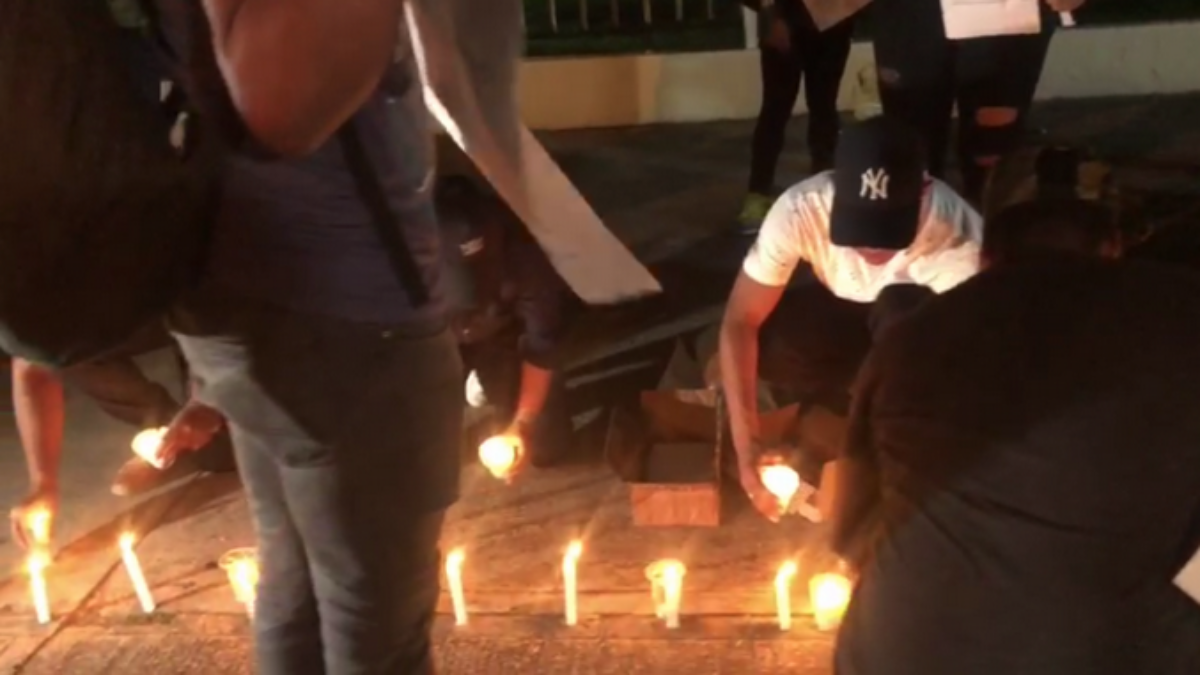 Citizens protest in front of the Naco detachment for the death of David de los Santos. LD photo.

Santo Domingo, DR
While citizen indignation is growing through all the media over the death of three young men while in custody in National Police barracks, the Minister of the Interior, Jesus Vasquez Martinez, promised that the actions to be taken by the government to prevent such crimes from happening again will be reported today.

Vásquez Martínez expressed that it is the responsibility of the Public Ministry to investigate what happened in the Naco police barracks, which resulted in the death of young David de los Santos.

He indicated that they would wait for the investigation results to take action against those responsible for the death of the young man.

During a visit to the Naco police barracks, Vasquez also said that measures would be announced this Thursday to prevent situations like those exposed from happening again.

“We must, and we will take preventive measures so that situations like these are not repeated… tomorrow (today), the country will be informed of a whole series of measures to prevent such situations from recurring. We are committed to human life and human rights,” he said.

Regarding the process of reform and renovation of the National Police, Vásquez Martínez asked for patience and said that it is something that takes time.

He specified that in just a few months, it is not possible to change a structure that has been in place for years.

Homicides
Despite the insistence of the authorities to wait for the results of the investigation on the cases of deaths of citizens after being arrested by the Police, two of the cases were declared homicides according to the death certificates.

These are the deceased David de los Santos and Richard Baez, arrested by police agents and later died from the injuries they sustained in police custody, both from blunt cranioencephalic traumas.

Consternation
The death of De los Santos has produced rejection in society, and among those who have spoken out about it has been the President of the Republic, Luis Abinader, who also expressed his dismay through a couple of tweets.

As in other cases, the president said that he guaranteed David’s family and Dominican society that in his government administration, no case of this nature would go unpunished.

Leonel condemns deaths
Former President Leonel Fernandez demanded yesterday that the authorities clear up the cases in which several young people from various localities of the national territory died in National Police detachments, events which, according to Fernandez, have caused pain and distress Dominican families.

Fernandez pointed out that these young people should have been protected by the Police, not mistreated. He indicated that no one should be physically assaulted even if they have been deprived of their freedom. “No one’s dignity can be trampled upon; that is why I take this moment (…) in the name of the People’s Force, to condemn in the most energetic way possible the brutal way in which the National Police killed these young people”, he said.

Another tortured in the Ocoa Police Station
Another 18-year-old, Christian Manuel Aguasvivas, was subjected to cruel torture at the National Police headquarters in San Jose de Ocoa. As a result, his mother claims he “lost his mind” and is under psychiatric treatment in the capital.

Magalys Aguasvivas told Telesistema Canal 11 that her son was arrested for an argument with another person and when “we went to the police station and found him tied and handcuffed in a motor, sitting on a chair; he did not have a poloshirt and was only in a bermudita. He was handcuffed and tied by the feet, he was beaten a lot, he had many scratches,” he explained.

The young man himself narrated on camera that he was kept handcuffed and beaten.

We all can hope these pledges are backed up with action. However, many pledges by government to the public are shaky. Because of this history the public does not have much confidence in its promises.

Time for the government to put up or shut up…