The UNWTO recognizes the Dominican Republic as number one in recovery 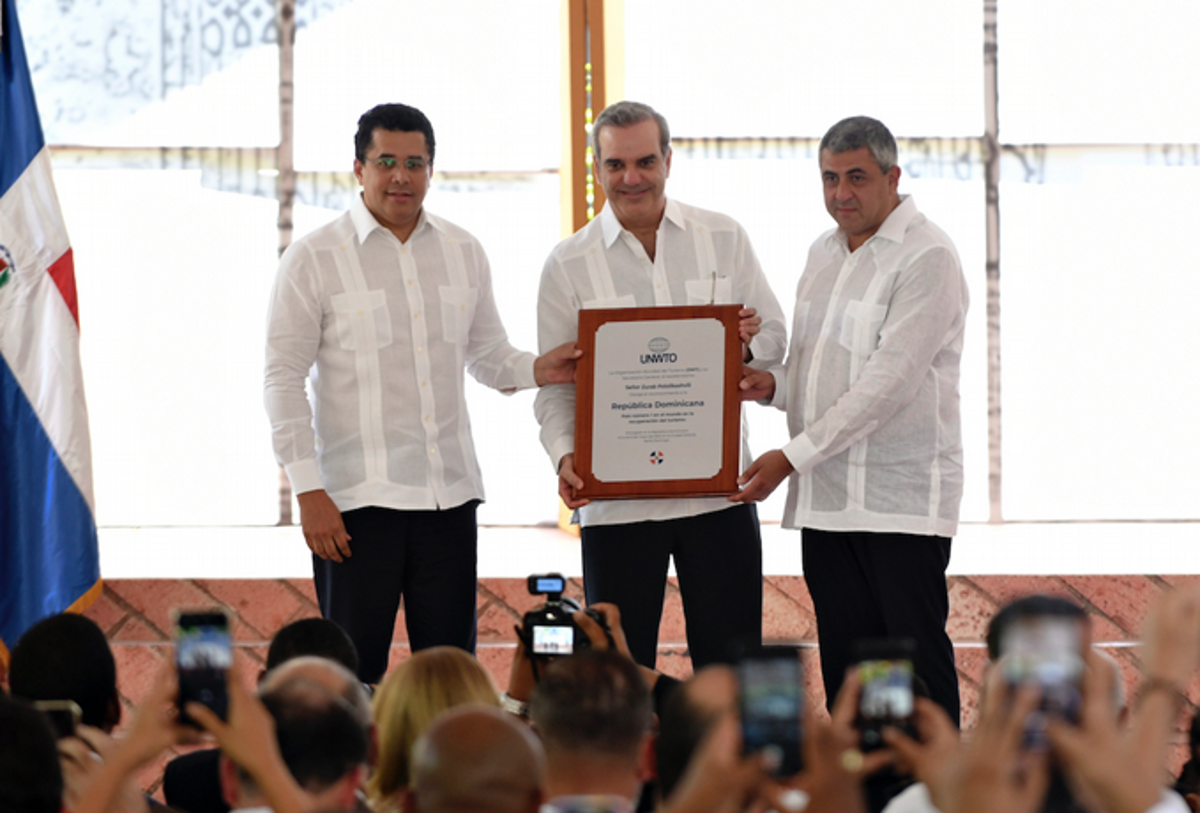 President Luis Abinader and the Minister of Tourism, David Collado, received recognition granted by the World Tourism Organization (UNWTO) that positions the Dominican Republic as the number one country in tourism recovery.

During the activity and after receiving the distinction, the head of state explained that the income received by this sector reaches almost US$6,000 million with an exact figure of US$5,700 million and added that if the tourism sector did not recover, the economy.

“When we came to the Government, we saw that the economic growth of the industrial sector was beginning to recover, the free zone sector as well, among others, but not the tourism sector, and if we did not recover that sector, we would not recover the Dominican economy,” he said, referring to the challenges that the incidence of the coronavirus imposed on the tourism sector while others were being restored. He highlighted the thousands of jobs generated by the opening of new hotels to benefit hundreds of Dominicans who did not have a job or had lost it.

He also reiterated that they were “doing the right thing.” In contrast, others criticized the measures that the government implemented to guarantee visitors’ stay, such as Covid medical insurance for tourists and tests at airports, among others.

Minister
While David Collado said that even though the current war between Russia and Ukraine has threatened the sector, thousands of foreigners continue to visit the country, directly benefiting tourism.

“Today we can say that we recovered tourism and that we made history having lost 60 days ago about 60 thousand foreigners per month with the war between Russia and Ukraine, we recovered and had the best month of April in history, we reinvented ourselves,” said Collado, who added that they will continue to overcome all the adversities that come their way.

He pointed out that since September-December of last year, Dominican tourism has broken records in the arrival of foreign vacationers. “In December, in the midst of the omicron, we had a record arrival of some 726,000 foreigners. We had the best quarter in the history of tourism in the midst of the pandemic”, he emphasized.

He said that since his management, “efforts will continue to be spared to increase the recovery of tourism, a multiplier effect of the country’s social and economic well-being.”

The Secretary-General of the UNWTO, Zurab Pololikashvili, highlighted that the Dominican tourism model stands out for achieving the most successful recovery of the industry, reaching record figures in the arrival of tourists.

Strategies
In addition, Abinader said that the current government differs from the rest of the countries in the strategies for sustainable tourism.

He also added that they had started a new stage to continue developing and exploiting this sector in the long term.

In 2021, he said, the country’s economy will grow by 12.3 percent, the highest growth in Latin America among ten nations in the world. In addition, he detailed that there are about 200,000 more employees than in the pre-Covid.

In January, some 5,000 places were filled in different hotel chains of the pope.

INCOME
$5,700 million
The head of state explained that the income received by this sector reaches almost US$6,000 million with an exact figure of US$5,700 million.

Appreciation
The president affirmed that the appreciation of the Dominican peso is mainly due to the income generated by tourism in the country.

Stability
Abinader also indicated that the decrease in debt in relation to GDP last year, which went from 69% to 62%, is due to growth and tourism.