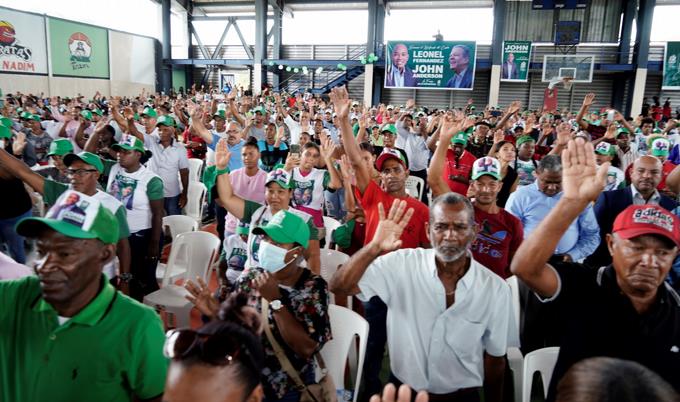 In a meeting with the business community and personalities that make up the external sector of the People’s Force (FP), the president of that political organization,  Leonel Fernández, assured that the government that directs the country’s destinies is not paying attention to the basic things that affect the Dominican Republic, referring to the high costs experienced by the primary family basket and other issues that affect citizens.

He also lamented the lack of support for agriculture and cited the low consumption of local products in the tourism sector.

“In the Dominican Republic, tourism contributes 39% of the growth of the National Product, but of what we eat here, from agriculture only 2%, then the agricultural sector is doing poorly. What has to do with the nutrition of the Dominican people, which is the basic, the fundamental, and people feel concern, anxiety, disgust, dissatisfaction because the government is not really paying attention to the basic, fundamental things of the Dominican people,” Fernandez said.

In the meeting, where he was accompanied by Roberto Rosario, coordinator of the external sector and member of the Political Directorate of FP, the leader of the opposition talked about the significant needs that the province of Samaná has; he mentioned the RD 2044 project, and the works included in this exciting initiative for that coastal province.

He mentioned the necessary works, having a landfill, basically in Las Terrenas, due to the great importance of tourism in this area of ​​the country. Fernández said that it is unacceptable that Samaná does not have an efficient system that guarantees water supply for all citizens and the tourism sector.

He also cited the need to rebuild the Samaná boardwalk and construct an anthropological museum, among others.

During his tour of Samaná and its municipalities, the president of the People’s Force swore in hundreds of former PLD leaders and other organizations who decided to join the FP.

The provincial leaders of the FP were present at the swearing-in ceremony; former senators of the Republic Prim Pujals and Ramiro Espino; former FP deputy candidate Jhon Anderson, who thanked those present for his support and urged them to work tirelessly to achieve victory in 2024.

Yeah! He was paying attention but only to make sure he got his percentage of all the stolen money!

The guy milked the country dry what’s he gonna do with all the money he stole ? Why does he want more ?

Does he hate the country ?

Finally someone who is doing something is in power why not just shut up with the millions (in dollars) that you have?

Btw I remain skeptical about this president too the PRD did its thing a long time ago too.