At 108 years old, he assures that old age is only in the mind 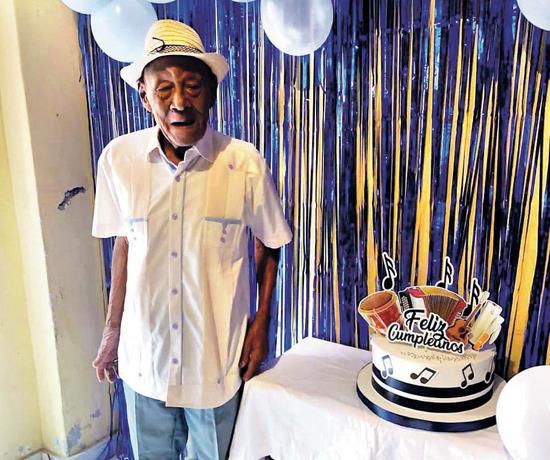 Vitality. Don Satu refers that at 108 years old, he feels as strong as in the peak of his youth and ruled out that men begin to experience a lack of erections over the years.

The sprightly centenarian thinks that a person 70 to 75 is still young and criticizes that some people consider themselves old before they are 65 years old.

In this regard, he refers that at 108 years old, he feels younger than before and, at the same time, he discarded that with the passing of the years, men begin to experience a lack of erections because everything depends on the state of mind, health, and nutrition.

He urged people to take care of themselves, save energy in the body and have a good diet.

Born on May 11, 1914, in Paraje Blanco, Luperon municipality, Don Satu, who is also a drummer, danced merengues by Yoyito Cabrera, Guandulito, Fefita la Grande, Tatico Henriquez and other merengueros tipicos, which is his favorite music, on his birthday.

He celebrated his 108th birthday surrounded by his wife Isabel Placido, 89 years old, who is in a wheelchair, and his relatives and neighbors in the Los Coquitos sector, Puerto Plata province.

He entertains his relatives, telling real stories and mysteries of his youth; besides, his anecdotes are very striking.

He tells that in his youth, he worked as a shoemaker and bus conductor for public transportation on the Santiago-Puerto Plata route, among other trades.

He was a drummer

He refers that he was a drummer of tipico music, which he insists is his passion.

And with satisfaction, he relates that he accompanied as a drummer in important festivities that great exponent of typical Dominican music, Tatico Henríquez.

He argues that there is no perfect youth because it is relative, expressing that for him at 108 years of age, a person from 70 to 75 years is young, from 60 to 65 he considers them boys or girls, from 40 to 60 youngsters, from 35 to 50 boys or girls, and 30 and below simply for him they have not been born.

He does not believe in monotony because he thinks that you can do everything in life, but in moderation, because extremes are all bad.

He exhorts to live with joy and harmony with other people, not to interfere in anyone’s life, not to envy others, to rejoice in the progress of others and try to help as far as possible those who have problems, and not to hurt anyone, because it is the secret of eternal youth.

To the humble and discreet birthday celebration, don Satu arrived accompanied by his wife of 89 years, whom he considers young compared to his age. But he also arrived with a new drum, with which he delighted those present.