The wall advances on the border with Haiti 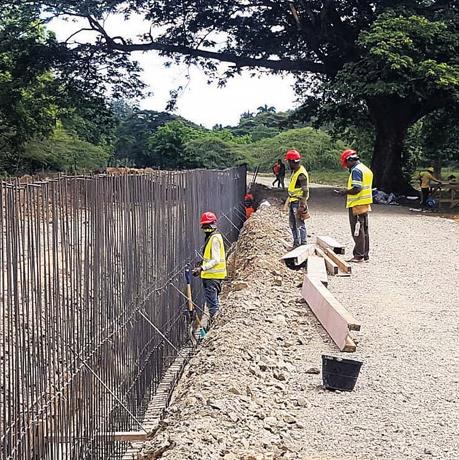 Two road sections are built on both sides of the fence, one to go down and the other to go up.

The construction work of the perimeter fence that the Government erects on the border to contain the transfer of undocumented immigrants, theft of animals, contraband, and other illicit activities, is advancing at an accelerated pace. However, there is still resistance from landowners.

Some border producers argue that with the construction of the wall, they would remain in Haitian territory. Still, the technicians who participate in the project maintain that this is false and that there is confusion among some people because they are unaware of the territorial delimitation.

Journalists from the Listin Diario verified during a tour of the area that yesterday workers placed the linkage on the farm of the landowner nicknamed Naguito, in pyramid 18 of the Sur neighborhood of Dajabón, where the work began and that it will advance in its first stage to Manzanillo, Monte Cristi province, to then continue towards the South.

Tony Maríñez, master of the work, reported that they work tirelessly every day, from 7:00 in the morning to 6:00 in the afternoon, regardless of holidays or non-working days, like yesterday.

The construction expert stated that two highway sections would be built on both sides of the fence, one down, and the other up.

The vehicles that will go to the South would use the route located next to the river, and those that move to the North are the one that is at the extreme right of the fence.

Maríñez pointed out that they work tirelessly and with great acceleration and that whoever wants to check it out has to go to the area because they do not put restrictions on anyone, and they have nothing to hide.

He added that Dominicans work in work, primarily natives of Dajabón and some duly documented Haitians.

The project began in pyramid 18 in the South neighborhood because it is the most central part of the northern border, where most animal thefts, undocumented immigrants, and other illicit actions take place.