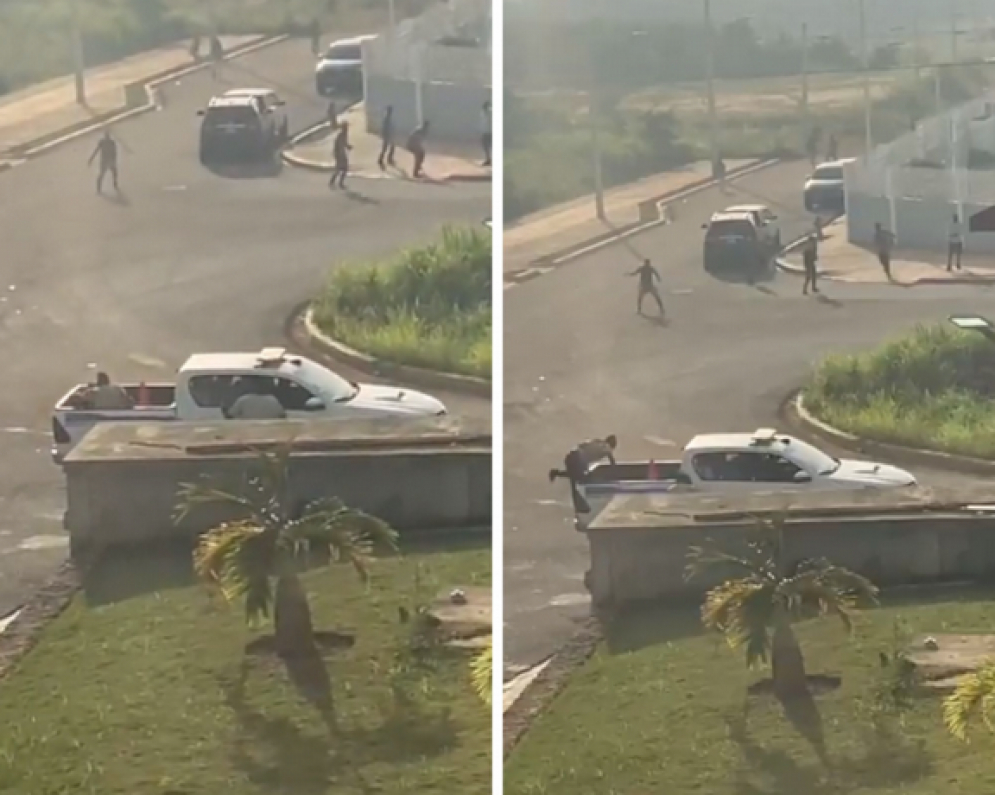 Santo Domingo, DR
The general director of Migration, Enrique Garcia, warned that the agency will not tolerate illegal Haitians who continue to violently confront the authorities to provoke disorder, as happened yesterday in Ciudad Juan Bosch.

A video posted on social networks shows a group of illegal Haitians throwing stones and bottles in Ciudad Juan Bosch, against inspectors of the Department of Migratory Control of the General Directorate of Migration who were working on the repatriation of undocumented immigrants.

Garcia, referring to the incident, recalled that this is not the first time that undocumented Haitians have violently confronted Migration Control units working in the detection and repatriation operations carried out by the institution.

The official stressed that on previous occasions there have been cases of serious violence of migration personnel injured by stabbing, stoning, and sticks during raids of arrests of Haitian illegals.

“And unfortunately this morning (yesterday) those illegals congregated in a gang and lashed out with stone, stick, machetes, and other sharp objects against a team from

The team, upon seeing their violent attitude, retreated to avoid a disgrace,” said Garcia.

Regarding the incident, the official said that he reiterated what he has said on other occasions, that migration respects the human rights and due process of the undocumented, but warned that he will not allow them to disrespect the authorities.

He stressed that the agency will take action on the matter and that the person will return again to Ciudad Juan Bosch, in the next few days, to carry out the operations in any place that needs to be done.

“We will go with due protection and security, to carry out the work established by law”, expressed the general director of Migration.

He clarified that the Migration Control team went to the place with little military and police protection because they did not think they were going to find in that sector that kind of resistance on the part of the illegal Haitians.

“We will not take even one step back and we will not tolerate in any way that these people in conditions of illegality in the country, disrespect the migration authorities”, warned the official. He specified that on countless occasions he has reiterated that the agency does not allow actions and abuses against illegal Haitians or other nationalities. “And when we have had to take drastic measures against any employee who has violated the recommendations, we have taken the corresponding sanctions,” he said.

Deportations of Haitians
Dominican authorities have deported more than 23,564 undocumented Haitian nationals, in operations deployed throughout the national territory including the different border points during the first quarter of 2022.

Deportations
Dominican authorities have deported more than 23,564 undocumented Haitian nationals, in operations deployed throughout the national territory including the different border points during the first quarter of 2022. Number. The highest number of deportations was in March, with 8,466; followed by February, with 7,940; and January 7,158.

The Haitians are way out of control. They must be arrested, incarcerated and then deported. Haitians have no respect for the law or anything else. Just look at what a mess Haiti is and ask yourself “why does the Dominican Republic even want them in the country?”

This is jus the beginning …tighten your seatbelts ;))

Shameful, humiliating, nauseating, and impotent. Your permissiveness and tolerance for the outsiders has converted DR into a satellite of its neighboring country. DR is version two of its neighbor. It is time to purge the country and restore the Dominicanhood!