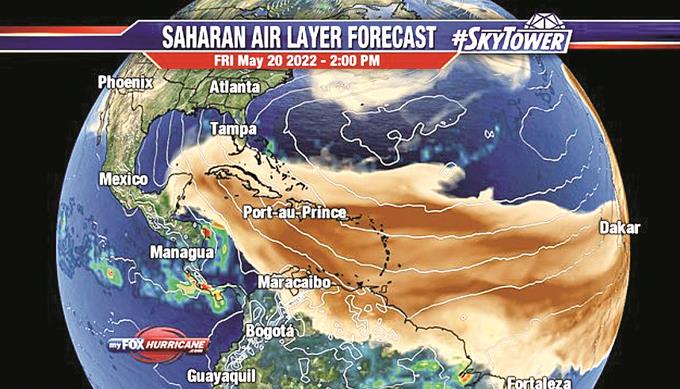 High temperatures were recorded yesterday in the country.

Forecaster Wagner Rivera, from the National Meteorology Office (Onamet), explained that temperatures between 34 and 36.4 degrees Celsius were recorded yesterday

A hot day yesterday surprised the Dominicans, who saw the temperature change in a heartbeat.

The forecaster Wagner Rivera, from the National Meteorology Office (Onamet), explained that temperatures between 34 and 36.4 degrees Celsius were recorded yesterday.

But this is not an abnormal phenomenon, just yesterday the country began to receive dust particles from the Sahara desert, which causes temperatures to rise. He said that these days there is a notable lack of cloudiness, which allows the sun’s rays to enter directly and heat the earth.

He explained that the highest temperatures are recorded in Puerto Plata and Villa Vásquez, Monte Cristi, where the levels reached 36.4 degrees, while in La Victoria de Santo Domingo Norte it rose to 35.5 degrees, among other cities,

In Santiago the temperature reached 34.0 degrees and La Romana 33.5 degrees”, Rivera added and said that since yesterday they began to frequently see the opaque or misty sky, as a result of the concentrations of small particles of Saharan dust that are positioned on the Caribbean. He explained that this pattern will continue until the end of September.

Today in a large part of the territory a sunny sky will dominate, hazy due to values ​​of African dust in the air mass and scattered clouds.

Temperatures will remain hot, due to warm wind from the east-southeast, in urban and coastal areas.

Everything we get from that place is hell.