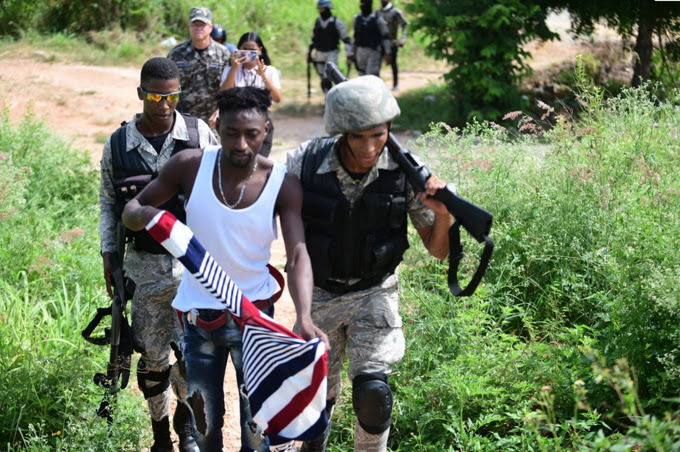 The raid was carried out by Migration Control units supported by the military and National Police troops who went to the sector from 6:00 a.m. onwards.

Santo Domingo, DR
The General Directorate of Migration detained 385 Haitians in Ciudad Juan Bosch during the operation carried out yesterday by its personnel, supported by military and police troops, who will be purged for their subsequent repatriation.

The massive detention began at 6:00 a.m., two days after an incident between the Department of Migration Control inspectors and a group of undocumented Haitian immigrants, which turned violent.

The director of Migration, Enrique Garcia, warned that this institution would not tolerate any foreigner in conditions of illegality, regardless of their citizenship, and violently confront the authorities who have every right to intervene against illegal aliens.

“All the Haitians detained were taken to the institution’s Detention Center in the Haina Vacation, where they are being purged to be later repatriated to their country, Haiti,” assured Garcia.

He reiterated that Migration will protect from the scope of its responsibility the national sovereignty and will confront in all areas the vandalism of foreigners, always respecting the people’s human rights and due process.

Garcia recalled that this is not the first time that undocumented Haitians have violently confronted the Migration Control units working in detention and repatriation operations carried out by the institution and warned the foreign and illegal vandals that the full weight of the law and justice will be applied to them and that they will answer for their vandalism.

Migration Control Units of the General Directorate of Migration (DGM), with the support of the Ministry of Defense members and members of the Special Anti-Riot Unit of the National Police (PN), detained undocumented immigrants in an interdiction operation in Ciudad Juan Bosch.

The operation with members of the Armed Forces and the elite corps of the National Police responded to the aggression carried out on Tuesday by Haitian citizens with illegal migratory status to agents of the agency.

On Wednesday, a video was posted on social networks showing numerous Haitian immigrants throwing stones, bottles, and other objects at members of a Migration Control unit of the General Directorate of Migration in Ciudad Juan Bosch, while they were working on the location and identification of migrants in illegal status.

Response to the incident
The Director
After the incident occurred in which dozens of Haitians resisted the work of the Migration Control unit last Tuesday, the director of Migration, Enrique Garcia, said that the personnel withdrew to avoid misfortune in the face of people armed with sticks, machetes, bottles, and stones, but that they would return with military and police protection to do the job.

Firm position
“We will not take even one step back and we will not tolerate in any way that these people in conditions of illegality in the country, disrespect the migration authorities,” warned the official. He specified that he has reiterated that the agency does not allow actions and abuses against illegal aliens on numerous occasions.

They (illegals) will be back in a few days.

I hear that the real reason that they were behaving hostile is that they were there working in construction and when the project was finished and final payday arrived it was decided by the engineer and project manager to call immigration. It saved them a lot of money.

Not true! That city was meant for the Dominican poor and now foreigners are settling there taking residence mean for the natives! They are doing the same thing in Altagracia near Punta Cana!

Thats what i also heard , it was time for the company to pay them instead they call immigration to avoid doing payroll , in that sense this is a grave violation of human rights