Abinader: There is a lot of rice, bananas and chickens 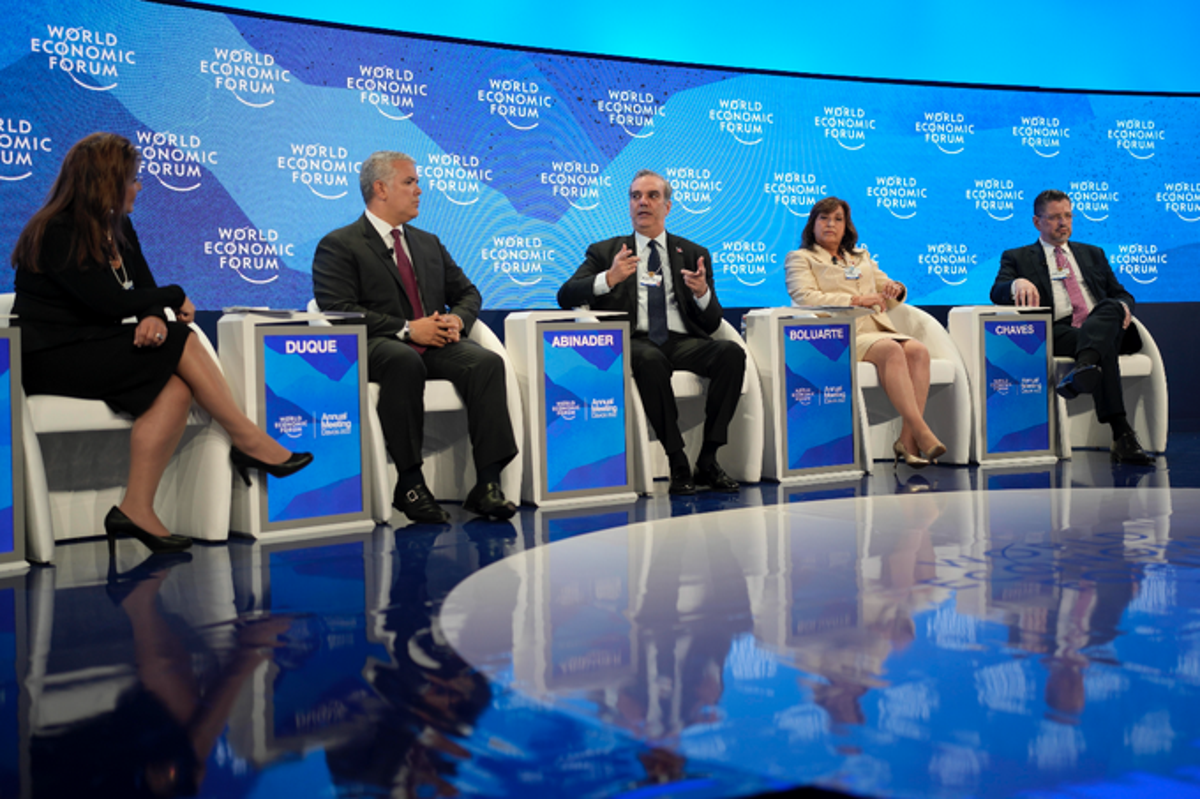 President Luis Abinader in the Latin American Presidential Panel, together with Iván Duque, from Colombia; Rodrigo Chaves, from Costa Rica, and the Vice President of Peru, Dina Boluarte. AP

President Luis Abinader supported the success of the Dominican Republic in the fight against Covid-19. He timely and strategically combined actions to guarantee the population’s health and the recovery of the economy, tourism, and food supply.

He stressed that for the first time in 20 years, they have not had to import rice and the fact that there is an overproduction of bananas and a record production of chickens.

They were asked how the region’s leaders can repair political fractures and cooperate decisively to address structural weaknesses and ensure long-term prosperity.

Covid Pandemic
Abinader recalled that he had attended a meeting with the World Health Organization (WHO), where he was recognized by its director, Tedros Adhanom Ghebreyesus, for the country’s efficient handling of the Covid-19 pandemic.

He added that upon arriving at the government amid the pandemic, at its highest point, with a collapsed health system, his first action was to increase the number of beds, especially ICUs, which were doubled in three months.

He said that the private sector made the first contribution of vaccines to the Dominican State and then reopened the hotels that were 90% closed.

The president contextualized that being a tourist country, unlike others in the area, the flow of tourists is essential in the Dominican economy. “We have between 16 and 18% of GDP and 20% of employment that depends on tourism,” explained Abinader.

He explained that many people told him that it was crazy to open tourism in the country but that the Dominican government managed to open 50% of the hotels in the 2020-2021 season, which meant 50% more jobs.

“We realized that if we did not recover tourism, we were not going to recover the Dominican economy,” he insisted.

The head of state said that health had to be recovered along with this recovery of tourism. In that order, he highlighted the acquisition of vaccines and the beginning of the logistics of the vaccination program throughout the country, with great emphasis on the employees of the hotels.

“We managed to open the economy, but maintain health, and today we have one of the lowest fatality levels in the world 0.7. We are according to the CDC at risk 1 just like the USA, and we were able to fully open the economy,” he indicated.

Economic recovery
Abinader pointed out that the Dominican Republic was the country that recovered the most in tourism, according to the World Tourism Organization (UNWTO), which earned national recognition for the measures adopted.

He also expressed that only 10% of the Covid infrastructure remained in the country and highlighted the recovery of the Dominican economy to the level that Latin America was the one that grew the last year with 12.3%.

“The first quarter we grew at 6.1%. I think that in the month of April we will continue at the same level. In the free zones we have grown exports by 34%,” he said.

Regarding traditional exports, he said that they have increased where the growth in all sectors is highlighted, with solid agriculture that, despite being affected, was helped by subsidies from the government.

Regarding inflation, President Abinader said that they have had to make special financing to the agricultural sector.

He pointed out that after Russia’s war with Ukraine, with the increase in raw materials, he has had to adopt measures so that the population is not affected by fuel prices. Similarly, he recalled the subsidies made to corn, wheat, and fertilizers.

He affirmed that the administration he heads has to be from day to day due to the constant changes that the world is experiencing, without projecting long-term.

He explained that the country was prepared in terms of social assistance and that a month after arriving at the government, they began to give general medical insurance from the national public health service to 2.4 million Dominicans who did not have it.

Contamination.
He drew attention to the ecological issue that Latin America is the least polluted due to low industrial development. “We are from the 10% that have polluted the least, however we are from the 10% with the greatest vulnerability,” she said.