The electricity crisis is alleviated 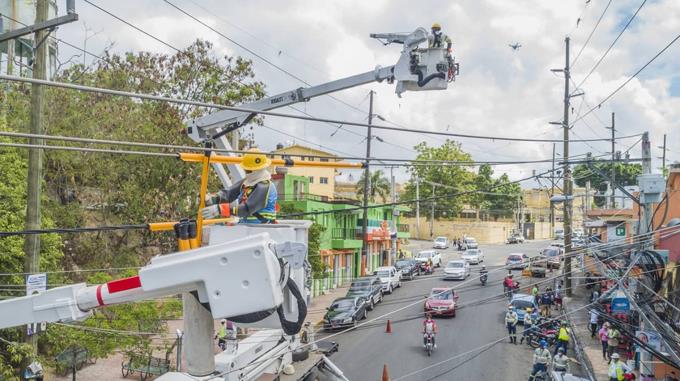 Blackouts give a break with multi-story input.

The National Interconnected Electric System (SENI) maintains a supply above 3,016 megawatts, a behavior that the authorities promise to maintain with a generation of 400 megawatts already in the bidding phase.

Currently, the service is stabilized after last week the exit of several generating plants at once, and the SENI took out more than 800 megabytes, causing blackouts in different parts of the country.

Yesterday mid-afternoon, there were 2,7114.3 megawatts online from thermal power plants, which are those that use derivatives of fossil fuels.

The energy demand is close to 3,200 megabytes in the Dominican population. To guarantee the supply, a national energy plan is being worked on that will gradually contribute about 2,000 megabytes over the next five years, said yesterday the executive vice president of the Distribution Companies of Electricity and Secretary of the Unified Council of Electricity Distribution Companies: Empresa Distribuidora de Electricidad del Este, SA Edenorte Dominicana, SA, and Edesur Dominicana, SA, Andrés Astacio.

Speaking on the El Día program, Astacio said that a short-term solution had been sought with 400 mg, and another 800 mg are being tendered so that the tender closes between July and August of this year.

He stressed that work is being done to add 2,000 mg to the system within five years, in addition to the fact that by 2028 the energy “mix” will have integrated 1,000 mg in renewable energy, which should allow energy independence and supply.

In the country, there is an installed energy capacity that can be used at any time of 3,350 megawatts, of which there is 250 mg in solar energy, 140 in wind power, and 400 mg from hydroelectric plants, but only half is used because priority is given to the drinking water and irrigation service, he explained.

Almonte
The Minister of Energy and Mines, Antonio Almonte, stated that the entry of several generators at the end of this month would guarantee the stability of the electrical system, which has experienced a notable improvement in recent days with the administrative measures adopted.

“Punta Catalina I is expected to start operating on May 30 and, in addition, the Los Mina V and VII generators will enter the system during the week, contributing more than 200 megawatts; while Estrella de Mar III will increase the offer by an additional 70 megawatts”, he said.

In the television program Hoy Mismo, Minister Almonte assured that with the reincorporation of these generators, the country would return to the point of electrical stability with a supply greater than demand but with a narrow margin concerning supply and demand.

Regarding the measures adopted, he said that they had talked with the executives of Barrick Gold and Falcondo so that they would increase the supply of energy that they supply to the system as part of their surplus production.

400 Mg tendered At the end of last year, an emergency tender for 400 new megawatts
was launched, which ended in March, and of these, 200 were awarded and will be installed in October this year to ensure a supply greater than the demand, said Almonte.

“The electricity crisis is alleviated” Really ????

what a line of crap. i have been here for 10 years and after 100’s of millions of dollars the electric problem is worse now than 10 years ago and all we get is a bunch of numbers and excuses. the Dominican Republic will never advance this way.