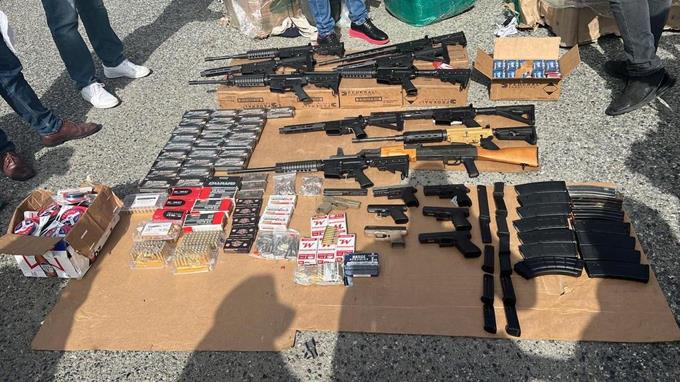 Santo Domingo, DR
The Directorate General of Customs (DGA) dismantled a network of Dominicans engaged in the illegal trafficking of firearms and ammunition.

The agency dismantled the alleged criminal network through an operation carried out in coordination with the Public Prosecutor’s Office, the Special Division of Investigation of Transnational Crimes of the National Police, and the Office of Homeland Security Investigations of the United States, and the Preventive Police.

During the operation carried out by the authorities in the province of Santo Domingo Este, a Dominican woman, identified as Cynthia Estefany de la Paz, was arrested, with eleven rifles and six pistols as ammunition of various calibers were seized.

Several vehicles and large sums of cash were also found during the searches.

According to a press release issued by the entity, the modality used by the members of this gang consisted in using the services offered by “shipping” or “mundancería” companies to bring the contraband into the country from the United States.

“Both the arrested citizen and the evidence collected were taken into police custody at the Case Processing Unit of the Prosecutor’s Office of the municipality of Santo Domingo East,” said the press release. It is also stated that the accused was remanded in custody.