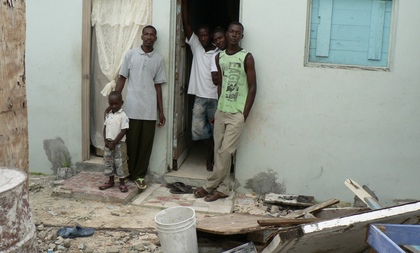 Santo Domingo.- The head of Immigration (DGMI), Enrique García, said that the slum “El Hoyo de Friusa” in Bávaro (eastern Dominican Republic), is “the most dangerous corner that exists in the country.”

According to the official, this place represents an alert for the Dominican State because “it has been taken over by Haitian nationals.”

By publicly implying that the agency he directs is aware of what is happening there, García was questioned by the panelists of the radio program “La Option de la Mañana” about why Immigration does not intervene in the area.

“We intervened El Hoyo de Friusa with more than 150 soldiers, that is the most dangerous place that exists for State Intelligence.”

Oh Yes, very super dangerous!!! So dangerous the area was voted most peaceful by residents and tourists. Bavaro! This is mind f&cking the people to incite violence. The govt can’t be blamed when it’s common citizen mobs perpetuating the violence.

Incredible position from the same guy whose grandfather was Haitian. Where do they get these people?

The immigration chief does have valid concerns. However it is overblown about Hojo de Friusa. This poster has been there many times mostly during the day over the last 25 years and has not been fearful. Being out in any urban barrio in the RD has many fearful risks, especially at night. Many of the residents in the Hojo are of Haitian nationality. However, a good portion of them work in the resorts and the ever growing construction industry.

This pronouncement by the chief of the Hojo being the most dangerous corner is melodramatic. It really suggests there is a movement cooking of an immigration raid and he wants to justify it in advance.