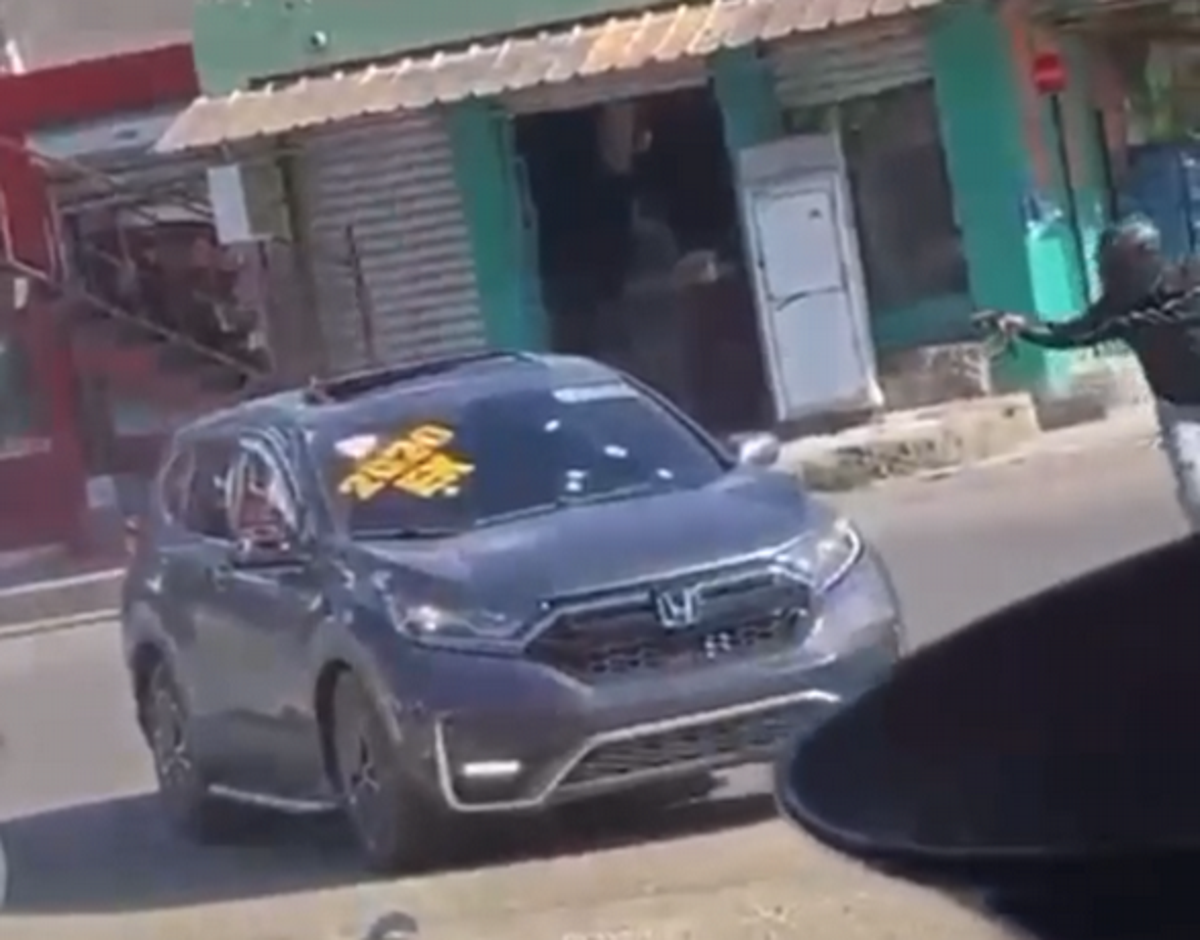 A hooded man unloads a machine pistol against a jeep, killing 2 of its three occupants. VIDEO TAKEN

In some capital sectors, it is claimed that these combined forces have only moved “in the streets above,” where it is calm and under control, but they do not penetrate the alleys where the criminals hide.

Just over 24 hours after President Luis Abinader ordered military and police forces to deal with crime, criminals show no signs of being intimidated and, on the contrary, seem to be challenging authority by continuing their wave of murders and assaults.

Yesterday afternoon, Fernando Santos Martínez and Víctor Sánchez Solano were killed, both inside a CRV SUV, on the San Isidro highway.

There is one wounded, identified as César Rodríguez.

In another incident, at noon yesterday, the Italian businessman Lucas Garafolo was killed inside his vehicle while traveling on the Las Américas highway, a few meters from the toll booth.

Also, it has been reported, without confirmation, that three agents from the Central Directorate of Criminal Investigations (Dicrim) were shot yesterday by hooded men on the Mella highway in Santo Domingo Este.

In Santiago, the ironmonger José Enrique Morel was murdered. On Independencia Avenue, in the capital, a jeweler was murdered,

Reaction to operations
The day after the operation of the National Police and the military forces began to combat crime and bring peace of mind to citizens, community members from the Gualey, La Ciénaga, Los Guandules, and Guachupita neighborhoods have complained about not having felt the patrolling in those sectors.

They assure that these combined forces have only moved “in the streets above,” where it is calm and under control, but they do not penetrate the alleys where the criminals hide.

In a tour of Listin Diario reporters in these areas of the capital, some even stated that they had not felt the patrolling, not having seen members of the Police and military personnel in trucks or motorcycles through the passageways and dead end streets.

However, others who do claim to have seen the surveillance and assure that they are calmer, although they warn that “you have to give it time” and see “if it is not a package (equipment).”

Pamela, a resident of the Gualey sector, said that they had not been there. “And down there, those criminals are finishing,” she said as she pointed.

The carpenter Rafael, from La Ciénaga, commented similarly. He said that he saw members of the institution of order at the funeral acts of “Bombo,” who was the leader of the alleged criminal gang “Los Menores.”

“The patrol that should be around here has not been seen and people are going to come from that side to dock because there is no security and there is no order,” he stated.

Mrs. Ergia Melly, an inhabitant of Guachupita for more than 60 years, asserted that after the Los Menores case happened, she had not seen police officers, much less the operation carried out on Thursday afternoon.

“I said to myself: It will be for the upper part or where they are in the rich ones, because here this neighborhood is an orphan. Nothing has been felt, but there are bands, it wasn’t that alone… That’s why I want to leave here, because one lives in great fear, “said Melly.

Luiggy Martínez, who also lives in Guachupita, said that the thieves patrol more than the Police and that the entity members hide from them.

“These days three armed men came out, and the policemen were there and they had to hide and they slipped away. Those patrols are bundles that they do. They have to walk and go into the alleys so that they run into the criminals. In a truck, who are you going to grab? to some people that you find sitting here… and how are the criminals doing? It’s through the alleys with a gun in hand and everything. As soon as they see a truck they hide. You, who are serious, continue to walk normally, and what do I do? I’ll take you prisoner to fill the requirement with the bosses. What they have to do is send the Police on foot like the blacks walk, who got off and left the bus somewhere and left with 20 or 30 criminals,” Luiggy said.

On the other hand, some saw the Police and military yesterday morning touring these same sectors, saying they feel protected.

Gerardo Pérez, a resident of Gualey, said he felt safe and trusted that the authorities would continue to patrol the area.

“We feel safe because the lack of them was that they made the mess. Now they are going to have to find where they are not, to commit their misdeeds because since they were not there, they could carry out their acts anywhere. There has been a little more calm because of what happened and we hope that it will improve,” Pérez said. In addition, he added that it would be convenient to install barracks in those neighborhoods because the few that exist are very far away. Fermín Galván, from La Ciénaga, said that they woke up better there and that now they could sit outside to get some air.

VIOLENCE
The reason.
The operation was put into effect in response to a criminal wave unleashed in the country that, in addition to the capital, has spread to different locations in the country. The death of four members of the criminal gang “Los Menores” or “Chuky Malos” at the hands of the Police unleashed the situation.

According to official reports, the death of Miguel Ángel Calderón “Bombo,” leader of the gang; Kelvin Santos de la Cruz, Yeral David Peralta, and another still unknown person occurred during an exchange of fire with law enforcement officers.

Democracy you failed to provide security. First you let citizen have access to firearms and that backfired on you (they are being used to mug people and to settle disputes and to commit femicide). Now you put the army on the streets and still, the bad guys have the element of surprise, better weaponry, and no fear and they know that you won’t be able to spend the money to maintain this near curfew.
Give it up! The Romans always used an emperor to replace the Senators whenever there was trouble at home or abroad!