Guards are waiting for arm wrestling with dangerous criminals 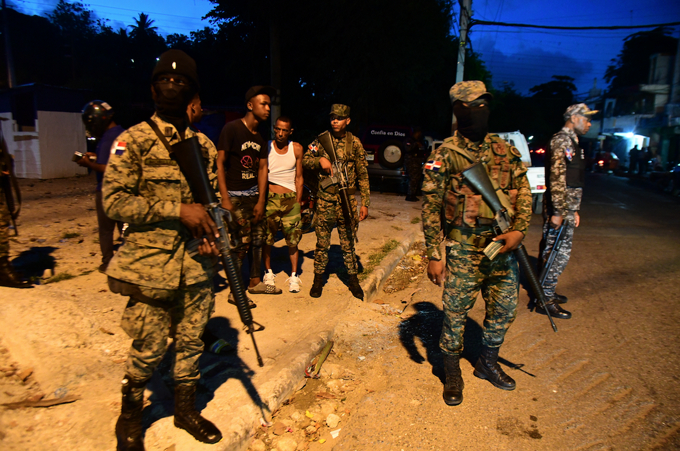 Overwhelmed by an uptick in crimes and various criminal types that have taken an unbridled course throughout the country, President Luis Abinader has responded forcefully to this sinister problem, standing up and calling for action by the military force to deal with resolve this dangerous challenge to your government and country.

More than his presence last Thursday, together with high-ranking Police and military officers, the gestures and firm tone used to warn criminals to surrender or they will be captured made clear his determination to stop this appalling evil that overwhelms citizens and darkens social peace.

Until a little over two months ago, the country had relieved a little of its daily sorrow in the face of a slight drop in criminality and crime, but the eruption of a gale of violent events, precisely from the police headquarters, spread quickly to other areas of the territory.

With this problem on top, the government of President Luis Abinader has had to face, during its first 20 months, three very damaging adversities that, in some way, have stolen widespread sympathy that could drag future political costs.

Abinader assumed the country’s destiny under the pandemic plague of the coronavirus shortly after the anger of the population grew due to the upward spiral of food and fuel prices, thus depreciating the value of his purchasing power, and now he was like a hammer blow this degrading criminal evil.

To combat this latest misfortune, the president, invoking a measure of temporary effects well demonstrated in practice, announced the deployment of military forces to the streets, together with the National Police.

Before this, his first note of satisfaction was marked by his sincerity when he recognized that the crime problem was real and that, during the last three weeks, it has experienced “a significant increase.”

Consequently, guards and police officers have returned to the streets to confront crime once again. They will have a package of technological and human intelligence resources as allies this time.

The guards arrive on time to hunt down the criminals because the Police are not prepared, neither in numbers, nor in equipment, nor confidence in a town that still looks at them with suspicion.

Abinader carefully handled his message of encouragement to the military and the Police, interpolating “respect for human rights” and “firmness in these circumstances.”

I want to tell you, said the head of state, “that I fully trust the actions of the National Police and I know that it will act with respect for human rights, but with the firmness that is needed in these circumstances.”

With criminals, Abinader carefully handled the dissuasive message, referring to the authorities’ desire to prevent an unwanted measure, but drew a red line against criminals and bandits by warning of the undoubted decision to use the power of the public force to punish with determination their illicit actions.

The president did not have to use secret codes to demand immediate results. Still, the command of the Police and his subordinate officers knew “by heart” what must be done to act “with the firmness that is needed in these circumstances.”

“I ask those who are acting in our neighborhoods and in our sectors, bringing unrest, to surrender in a peaceful manner, because if they are not they will be found wherever they are,” said the president.

Another test for the military
From all this, the president’s movement leaves a bit of uncertainty that the military presence could last a short time, and after being removed from the streets, as has always happened, the criminal hordes return to their walks.

It has always been like this. It is a hateful, vicious circle that moves from one end to its starting point, and everything remains the same. This was another government measure of a reactive nature in the face of the overflow of crime that seemed to be hibernating. It will only be possible to contain, and very unlikely to eliminate, an emboldened offense that does not fear a weak police force, in which some of its personnel have always shared in the crime and show resistance to change.

Also, as long as our military and Police are on the streets, alert and far-sighted, everything will be fine, but when the time comes when “circumstances” cause the discharge of a criminal who has assaulted, robbed or murdered a citizen, the notes of sentence will be online, all in the name of human rights to which it seems the victims were not entitled.

This is what history records, and the facts are there. Given this, the authorities have to clearly define whether the military deployment will be a balm to calm the anxiety of citizens due to this resurgence of crime or if it is a sustained campaign to end this misfortune. President Abinader has to get rid of this delinquency problem, even if he has to impose himself against any force of gravity.

He is today 73 days away from completing his first two years as head of the government, facing and overcoming serious natural, social, economic, and political setbacks that have robbed him of part of the charisma that elevated him to the pinnacle since he took a seat in the Casa de la Delgado.

Luis Abinader is a young man. This coming July 12 turns 55 years old. He has very noble intentions to make a good government. Those are his wishes, but he must be alert enough to hit the obstacles in time, without yielding or fearing pressure, inside or outside his party. Or from the outside.

Its best example is El Salvador, where its young president, the extrovert Nayib Armando Bukele, who, as a coincidence, will be turning 41 this July 24, has faced the whole world defending his convictions and his government policies, peace of his people, specifically those against the most dangerous in the world, and he is winning the battle.

They have accused him of being a dictator and violating human rights; they have threatened him with death and blockades and denounced him in international organizations. And yet he doesn’t give in. His popularity is one of the highest on the continent. Bukele is experiencing a great paradox: high support in his country and criticism on an international scale.

His prestige skyrocketed in recent days when, after announcing the imprisonment of thousands of gang members, he issued a decree that gave him special powers to combat them and expanded the military’s power of action.

“All the cells closed 24/7; nobody goes out to the patio. Message to the gangs: because of their actions, now their ‘homeboys’ won’t be able to see a single ray of sunlight”, ordered the president, ready to punish them where it hurts the most. And this did not stop there because Bukele accompanied his orders with a series of messages to judges and prosecutors, warning them of the new situation that reigns in the country in the face of the temptation to attend to possible human rights violations.

“We will be aware of the judges who favor criminals,” he wrote. A day later, there were dozens of detainees. The fight against crime in El Salvador de Bukele does not follow an improvisation route there. His decision to send more soldiers and Police to the streets has given him tangible results, and now he is singing victory there.

So much success in El Salvador, a country with 7 million inhabitants, where there are around 70,000 gang members. Meanwhile, here there is no idea how many criminals continue to plague the lives of almost 11 million citizens.

If the military went on a prolonged patrol, was well equipped, and were allowed to cordon off areas for a long time, extending the suffering of so many good people would not be necessary because the guards know how to do their job. And they do it well and quickly, without much noise, and being unlikely to make friends, connections, and alliances with the bandits.

Democracy failed to bring security. Not just in DR but in Central America too where hundredth of thousands migrate to the United States via Mexico.
Give up democracy! Let a dictator asphyxiate the bad guys or you are just letting more blood run through our streets.

Lol 🤣🤣🤣 Your living fantasies man” I will put my money on the police and military to bring order and peace to the citizens of the country. whether they have to killed a million of them or complete genocide” so be it, let the dead bury the dead” as jesus christ said😎