Several earthquakes are recorded in the Dominican Republic, did you feel any? 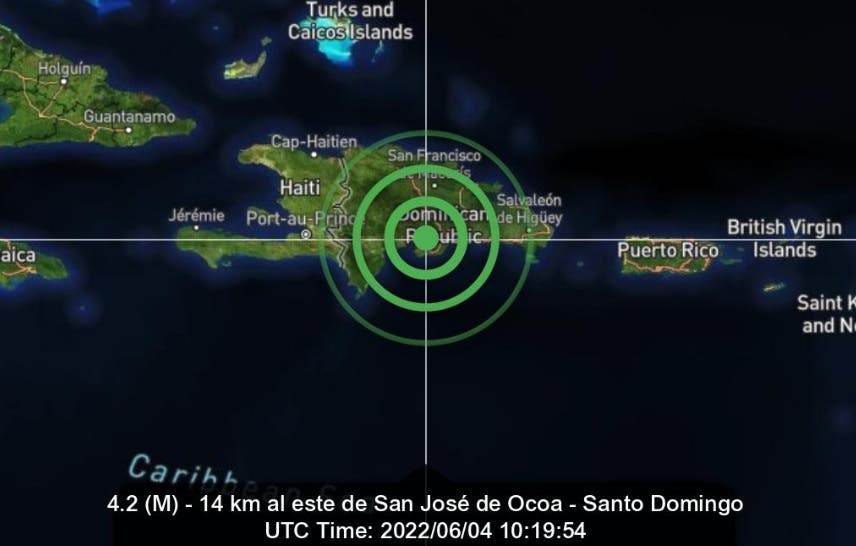 According to the National  Seismology  Center of the Autonomous University of  Santo Domingo  (CNS- UASD ), an earth tremor was felt this Saturday morning in some sectors of the Dominican Republic.

The earthquake had a magnitude of 4.2 on the Richter scale, with an epicenter southeast of San José de Ocoa, on the Ocoa fault.

Another tremor of the same magnitude was recorded a few minutes later in Barahona.

In addition, two earthquakes of 3.1 in Punta Cana and 2.1 in Pedernales occurred, but they were not felt due to the low magnitude.

What to do before, during, and after an earthquake

* Basic knowledge of first aid and having an emergency kit.

* Know the location of gas keys, water, and electrical fuses.

* Carry out evacuation drills in case of earthquakes to instruct the population on the measures to be taken and determine if the emergency plan is effective.

Keep calm, as many suffer injuries due to being cut by glass, falling objects, crowds of people on stairs, and all because of panic.

* You must remain calm and avoid panic or mass hysteria.

* Locate yourself in previously established safe places if you cannot do so close to resistant objects, away from windows or things that may fall.

* If necessary, to evacuate the place, use the stairs, not elevators.

* If you are in the yard, stay away from buildings, power lines, and windows.

* If you go by car or bus, the driver must slow down and stop in a safe place. Also, people should stay in their seats until everything returns to normal

* Observe if there is someone injured and provide first aid.

* Do not touch electrical cables that are on the ground.

* Close the gas taps to avoid leaks and do not use them until the proper inspection has been carried out.

* Do not return to damaged areas without prior authorization.

* Use the phone only for urgent calls.

Census carried out in the Colonial City as part of revitalization

Technology and access to data, among challenges of Dominican agriculture