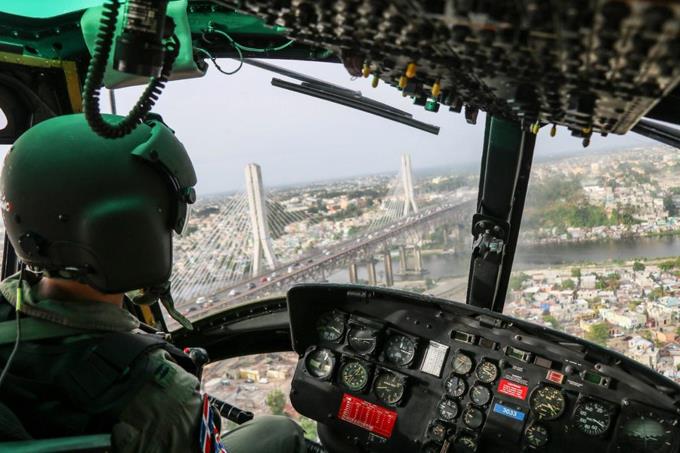 Military helicopters are used in patrolling against crime.

Santo Domingo, DR.
From helicopters and security towers, some sectors with the highest crime rates in the capital are guarded by mixed forces of the National Police (PN) and the Armed Forces as part of the hybrid patrolling plan.

The surveillance methods were applied in sectors such as La Zurza, Gualey, Ensanche Simón Bolívar, and others, according to information obtained by this newspaper.

“Yes, I saw it. Yesterday (Saturday), they were around here,” said Carlos García, a merchant in Ensanche Simón Bolívar, about the aerial supervision.

The characteristic sound of the aircraft was also heard in La Zurza, where the operations are carried out by land and water.

On this modality, Private Victor Madé Romero, in charge of personnel of the detachment of the zone mentioned above, explained that these are “specialized” interventions.

“They are carried out with all the military forces. We use boats, helicopters, and tanks. A complete intervention” detailed the police officer.

Likewise, Madé Romero pointed out that during this operation alone, 43 people were detained for investigation purposes and another 22 for irregular migratory status who were handed over to the Migration Department.

Madé Romero pointed out that during the other days, they deploy several units in charge of preventive patrols.

Sergeant Cuevas, in charge of the personnel of the Guachupita detachment, said that the specialized interventions are being made gradually and that in the case of the sector where the police station to which he belongs is located, they carry out operations in vehicles and on foot.

Cuevas specified that due to the narrowness of the roads, the teams moved on foot to cover “all the alleys.”

To make the work more efficient, the authorities recently announced the incorporation of security towers which immediately attracted the community’s attention.

Regarding this equipment, the Police Communications Department informed that it is a mobile surveillance system that provides 360-degree visual illumination.

They emphasize that the towers allow remote support, high-definition recording, and the collection of evidence of crime.

According to Madé Romero, two of these machines were temporarily used in La Zurza last Friday and will continue to be deployed in other sectors.

During a tour of some localities yesterday, the locals supported the citizen security strategy and encouraged its continuation.

“Very good. This is what must be done to stop crime,” said Juan de la Cruz, a resident of La Zurza for 13 years.

Meanwhile, Rafaela Sánchez, community leader of the same sector, indicated that crime has decreased but that they should also increase patrols in the early morning hours.

In addition to the imposing caravans of motors, vans, and trucks moving together through the city, a Listin Diario team was able to witness members of the Central Investigation Directorate (DICRIM) while they were carrying out operations in the 27 de Febrero sector.

In the middle of midday traffic, members of the DICRIM intercepted a vehicle that, according to brief statements, was being followed for swindling.

Results
From June 2nd to June 8th, the National Police reported the apprehension of 24 alleged “recognized criminals,” three with records and one on the run.

Undocumented
They also reported the arrest of 439 undocumented persons, and 99 were brought to justice.

They confiscated 34 pistols, one rifle, nine revolvers, an equal number of shotguns, five homemade weapons, and one toy weapon.

Regarding the narcotic substances, the law enforcement agency pointed out that marijuana, cocaine, and crack were seized during the patrols, which began last Thursday, November 2nd, by order of President Luis Abinader, after leading a meeting with the National Police Council.