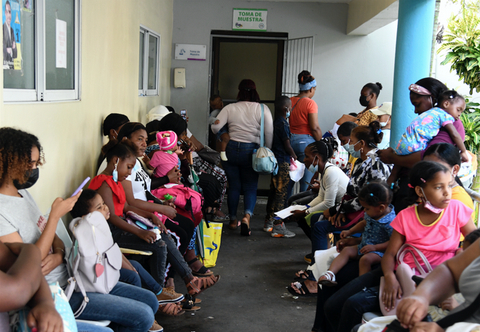 The country’s health authorities insist that it cannot yet be identified as the sixth wave of the pandemic because there is no new variant of the virus.

Santo Domingo, DR
In the last few weeks, the BA.1 and BA.2 subvariants of the omicron variant of Covid-19 have been circulating in the country, both identified in the National District and Santo Domingo province, causing a greater increase in the number of infections.

Yesterday, these demarcations reported 505 new cases out of the 737 cases reported in the last 24 hours at the national level.

While in the other provinces of the country, only the circulation of the BA.2 subvariant has been identified, according to the results of sequencing done at the Dr. Defilló National Laboratory in 1,603 samples taken between May 13 and June 13.

Yesterday, the country registered an increase in hospitalizations due to the disease with the notification of 214 patients admitted in regular beds and 29 in intensive care, contrary to the previous day when 187 and 23 patients, respectively, had been reported. Three patients were on ventilation.

New positive cases
The epidemiological bulletin number 818 reported yesterday 737 new positive cases of the virus detected in a total of 7,598 samples processed in the last 24 hours, placing the daily positivity at 16.56%, lower than that reported the day before, which was around 20%, and that of the last four weeks at 8.75%.

Active virus cases rose yesterday to 3,739, with Greater Santo Domingo registering the highest number of new infections, with 505 cases reported out of the 737 reported in the last 24 hours.

In Peravia province, for the first time since the beginning of the pandemic, more than 100 cases were reported in one day.

So far, according to the Director of Epidemiology, Dr. Ronald Skewes, despite the increase in the number of patients admitted, the country’s hospital system has not been stressed, and bed occupancy is low about the installed capacity.

Sixth wave
Although they recognize that in the last weeks, the cases and positivity of the virus show an increase, the health authorities insist that it cannot yet be identified as the sixth wave of the pandemic since no new variant of the virus has been identified in the country, but the same sub-variants of the omicron are still circulating.

The Minister of Public Health, Daniel Rivera, and the Vice-Minister of Collective Health, Eladio Pérez, reminded us that no new virus variants had been identified in the country. When the same variant circulates, it is not considered a new wave. They said that there are countries where the BA.5 subvariant of omicron predominates, but it has not been identified in the country.

They reported that the current week had seen a slight increase in the virus indicators, which may be a sign that cases are beginning to decline, and highlighted that 41% of the country’s municipalities had not registered cases in the last three weeks.

They explained that the transmissibility rate has also been dropping, standing this week at 3.9 per symptom onset and 2.7 per notification date.

They assured that prevention interventions are being carried out, reinforcing the delivery of masks and the collection of samples. They emphasized the importance of people maintaining preventive measures such as using masks in massive and closed places, hand washing, and completing their vaccination schedules, the demand for which, they assured, has been increasing.

5% positivity in schools
The Minister of Public Health emphasized that even though the highest infections are in children under 20 years of age, the cases in schools are low, maintaining a positivity rate below 5% and that in schools where cases have been identified, they have acted quickly according to the protocol.

Dr. Rivera said that if the schools apply the established Covid-19 protocol, the school calendar can continue as normal, without interruption, and reminded that school vacations are not far away.

Meanwhile, Dr. Skewes highlighted that for 20 weeks, the Dominican Republic had maintained an incidence below 50 cases per 100,000 inhabitants, which is a very good indicator, and gave examples of other countries where this incidence is much higher.

Main focal points
The capital city
The main focus of contagion is the capital, with 505 positive cases reported yesterday.

Baní
Peravia province has the highest number of infections, with 101, a figure that had never reached that territory since the beginning of the pandemic on March 1, 2020.

It is followed by San Cristóbal, with 18 and San Pedro de Macorís, with 16 cases.