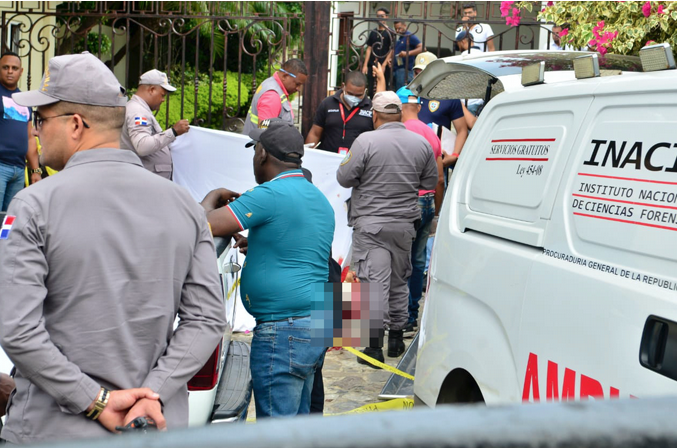 The deaths with extreme criminal violence of at least ten people during the last 18 days raise concern.

Shooting, murder, strangulation, and settling scores are common episodes in movies and novels. Still, in just over two weeks, the country has witnessed how these scenarios have jumped from invention to reality, causing pain, anguish, and fear in the population under the fatal transit of delinquency.

During the last 18 days, the lives of at least ten citizens were taken under any of the circumstances mentioned above, leaving the lifeless bodies in pools of blood, in the case of six of them, or floating on the waters of rivers, in the four other remaining cases.

Tragedies in Santiago and Moca

The most recent were the murders of the Mocano merchant Juan Gil Ramos and the renowned lawyer Basilio Guzmán. The latter was killed at the entrance to his residence in the Los Cerros de Gurabo sector in Santiago when he was about to pick up a copy of the newspaper last Tuesday.

Guzmán received more than ten shots, according to preliminary information, in an incident that occurred at approximately 7:00 in the morning, perpetrated by two people on a motorcycle.

As the morning progressed, another tragedy would once again alter the calm of just the second day of the week. It is about the death of Gil Ramos, whose lifeless body was found by relatives, tied hands and feet, with an adhesive tape over his mouth and neck.

The 63-year-old man owned a commercial establishment in the San Luis community in the Moca municipality.

Another also found dead in his own business was Leopoldo Rosario, 74 years old, with signs of strangulation, in the Los Tanquecitos sector of Andrés Boca Chica.

According to information provided by his family, the businessman in the laundry sector, who was a member of the United States Navy and a ship engineer, had returned from retirement to the Dominican Republic.

According to the Union of Microentrepreneurs of the Boca Chica municipality, it is not the first time that one of their own has died in confusing circumstances; for example, on May 12, the businessman Víctor Miguel Hernández, 33, was killed in his home, who connects with his business, after being gagged and tied up just like Leopoldo Rosario.

Added to this list of deaths are the homicides of Engel Ovalles, in Los Praditos , National District, as well as Víctor Brahiar Sánchez Solano and Fernando Santos Martínez, on the Mella highway , Santo Domingo Este.

These cases, which occurred on Saturday, June 18, and Friday, June 3, respectively, respond to alleged acts of “settling accounts” and “betrayal,” according to the testimonies of relatives.

Regarding Ovalles, he was shot by a delivery identified as Marco Antonio Pérez Frías, who the National Police had already arrested.

The event was recorded in a video that circulated on social networks, where the executioner could be seen approaching and shooting.

Meanwhile, Sánchez Solano and Santos Martínez were the fatal victims of the attack that was carried out on public roads and in which Julio César Rodríguez was injured.

Rodríguez, 20 years old, and the other two inside the jeep that was shot “had to pretend to be dead to survive,” family members said.

After the fact, the young man was taken to the Darío Contreras hospital in serious condition.

On the other hand, the deaths of the brothers Anaibonin de Paula Vásquez and Nelson de Paula García in the El Higüero river and of Segundina Santana Martes and her daughter Piera Natalia Santana, in the surroundings of Los Gringo beach, municipality of Haina.

The men and the two women died in circumstances that have not yet been fully clarified since, despite being on the banks of water sources, the brothers had gunshot wounds and stab wounds. At the same time, in the case of the mother and his daughter, relatives are divided between the hypotheses as to whether it was an assault or poisoning.

This is only the tip of the ice berg. I live in boca Chica and there are so many other deaths, robberies and assaults that are never covered in the papers. police do nothing and are useless. When there is trouble the police run the other way. some are in cahoots with the thieves.