Haitian women in labor pay RD$15,000 to cross into the Dominican Republic 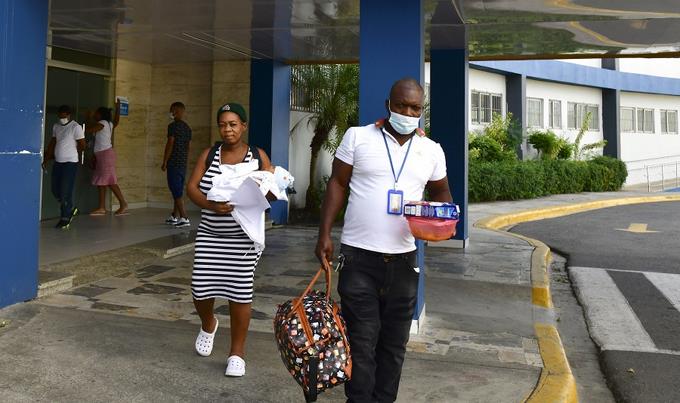 Haitian women in labor pay RD$15,000 to cross into the DR

The odyssey facing Haitian pregnant women seeking to enter Dominican territory to give birth in public and some private hospitals are depressing.

Many of them (the wealthiest) say they pay between 12 to 15 thousand pesos to “los poteas” (illegal traffickers), who operate on the Haitian border to help them cross the border.

But if they don’t have legal documentation, after they manage to enter the Dominican part, they have to have more money to get to the health centers where they want to give birth.

Some of the traffickers of undocumented people are closely linked to the bands that are dedicated in Haiti to kidnapping people for financial ransom, as well as assaulting, stealing, raping women, and girls, trafficking and human trafficking, smuggling drugs, merchandise, weapons, fire, and other crimes.

The poorest of the women give birth in the Matías Ramón Mella hospital in Dajabón and other towns located on the Dominican border.

However, those with better economic positions prefer to give birth in maternity hospitals in Santiago, and Mao, Haitian social worker Colette Baptiste told Listin Diario.

In this sense, he expressed that many Haitian women in a state of pregnancy begin the journey at seven and eight months, so the inconveniences are minor “because there are many controls.”

Haitian teacher Reinelda Jeune, who lives in Trou Du Nord, in the northeast of Haiti, said that when she arrived in the city of Ouanaminthe, located 600 meters from Dajabón, she paid 13,000 pesos to several “poteas” to help her cross the Dominican border.

“I was almost eight months pregnant, they sheltered me in a house in deplorable conditions in Ouanaminthe and at dawn, they (“los poteas”) crossed me along with three other pregnant women,” she emphasized.

Gangs operating in Haiti charge up to 15,000 pesos to Haitian pregnant women who want to give birth in Dominican hospitals.

Are we supposed to feel empathy for this? They are saturating DR with their people. We pay for those births. We must stop this. Haiti is fully capable of helping them to birth there. This is plan to continue with the fusing of the two countries. Abinader, pldprdprm and others STOP THIS! This is no longer a humanitarian issue. This is a national threat to DR. You don’t have the permission of the Dominican people to let this continue.

This is speaking out load that there are Dominican enablers of the mafia operations that traffic the pregnant women across the border. The first line of defense is the military at the border. They are supposedly trained to stop foreign pregnant women and illegals from crossing the frontera. The reality is the Dominican military at the border is not doing its job, no matter how much praise they get from their high officers and politicians. Money creates cracks in the wall. The Domincans have to take a long look to see who is to blame for this cross border trafficking. The finger points at their border protectors?

WE JUST WANNA KNOW IF THEY AT THE VERY LEAST ARE SENDING THE INVADERS BACK MATE!

-14
Reply
The guy above me is haitian
Reply to  Chupacabra

What makes you think we want your people here even if we were the wealthiest nation in the world ?

Furthermore why don’t you instead of trying to snatch other countries’ wealth you do something about your country instead of expecting everyone to solve your problems ?

In conclusion, Haitian pregnant women cross the border illegally to give birth in DR public hospitals pushing poor Dominican women out of their own healthcare services. And you will not find a single Haitian man or woman being appreciative of this free service to them. And somehow the failure of the Haitian government to provide for the basics need of its own people is blamed on the Dominican government and the Dominican people. HAITI AND THE HAITIAN ARE NOT DOMINICAN REPUBLIC RESPONSIBILITY.