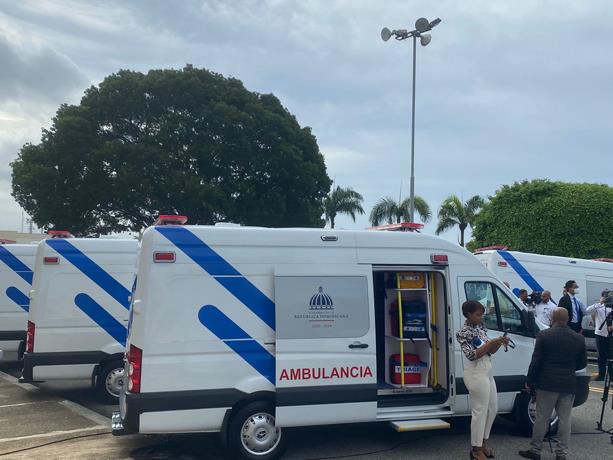 The acquisition of the ambulances was made through a competitive process in which “about six national companies participated, according to Paliza

President Luis Abinader headed this Thursday the delivery of 30 ambulances that will be distributed in hospitals in different provinces of the country.

The president was with the Administrative Minister of the Presidency, José Ignacio Paliza, who explained that the investment in these mobile equipment exceeds 160 million pesos.

Paliza said that the acquisition of the ambulances was made through a competitive process in which “about six national companies participated and the purchase was awarded to the cheapest bidder.”

The tender was held in November of last year with the aim of improving the interhospital health service of these demarcations.

They were delivered to the National Health Service (SNS), directed by Mario Lama, with all the corresponding documents and up to three-year guarantees.

In addition, the retired general Juan Manuel Méndez, director of Medical Emergencies of the National Health Service (SNS), explained that through this “it will be provided with the operating resources, for example, fuel and maintenance so that the ambulances do not deteriorate.”

“It is important for the provinces and municipalities to have these teams to preserve lives,” he stressed.

The ambulances were purchased on government instructions through the Administrative Ministry.

What’s the use…they get lost like geese in the fog…few people that i known died because of their incompetence …you need trained people…!!!

Kind of like the previous government building more schools. It is what is in the school, not the school itself that needs the biggest improvement.

These ambulances will serve to transfer the injured or sick to medical treatment facilities. The staffing of these vehicles is a roll of the dice. Trained EMT’s or Paramedics of North American or European standards are rare in the RD. Crews that do exist may have some high quality trauma first aid experience, but that experience is not across the board for all regions.

History serves to say the vehicles will be pounded into the ground soon because of low or no maintenance and abusive road operation. It is not uncommon there is not enough money to pay for fuel.