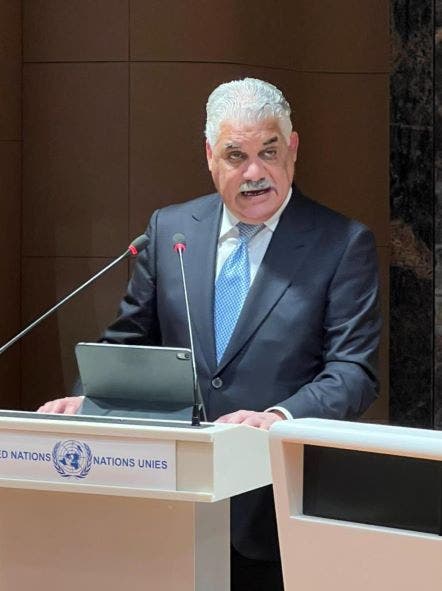 Geneva, Switzerland – Miguel Vargas Maldonado made an emphatic appeal to the international community to join efforts and come to the aid of Haiti; a country plunged into a deep crisis in various aspects.

The request was made during his speech at the World Council of the Socialist International meeting held in this city.

As mentioned above, Vargas Maldonado spoke as president of the organization’s Committee for Latin America and the Caribbean.

“I take this opportunity to make a halt, raise my voice in this Council and call on the international community, especially multilateral bodies and countries such as the United States, France, and Canada, to go in support of Haiti and act as agents promoting the construction of a broad consensus among its various social and political sectors,” he said.

The political leader asked these nations to take action “to stabilize Haiti, achieve national unity, overcome the crisis, and undertake the social and economic reconstruction that will lead the Haitian people on the path of development.”

The former Dominican Foreign Minister also referred to the boom in migration in Latin America and the Caribbean.

He explained that, in addition to the economic reasons for this phenomenon, it is now also necessary to consider those displaced due to climate change.

“Although international legislation does not offer protection to those fleeing their countries of origin for this reason, which complicates its quantification, the International Organization for Migration (IOM) predicts that in the coming decades, more than 250 million human beings will leave their homes because of climate change,” he said.

The effects of the war between Russia and Ukraine

Another issue addressed by the president of the Dominican Revolutionary Party (PRD) in his speech was the consequences of the war crisis between Russia and Ukraine.

Vargas highlighted that the conflict has caused, in the first place, a significant loss of lives, a threat to world peace and the economy, adding instability in the prices of natural gas and oil, whose reference values, since the last week of February of this year, have exceeded 100 dollars per barrel.

“Although the energy issue is negative in itself, the most worrying aspect of this unfortunate conflict is the impact it could have on food supply in the medium term,” he said.

In that order, he explained that Russia and Ukraine are among the top ten wheat producers worldwide.

“In fact, the Secretary-General of the United Nations himself recently warned of a possible collapse of the world food system as a result of this conflict, which has also had a strong impact on the inflationary crisis affecting the global economy,” he continued.

Vargas stated that, in this sense, social democracy in the world must become a facilitator of peace “so that this conflict does not escalate to other stages and that, on the contrary, its protagonists walk the path of constructive dialogue and pragmatic agreement without winners or losers.” Finally, he urged all the member parties of the Socialist International to “work with dedication so that humanity can overcome the crisis and look with optimism, faith and confidence towards the future with a prosperous, united and peaceful planet.”

Haiti is a bottomless pit…no remedy for them….nothing will change anytime soon…

“IF” Haiti had giant untapped oil reserves or large veins of unmined gold the international community would be sending troops in dress uniforms, government administrators in formal suits, with thousands of humanitarian agencies at the drop of a hat. The reality is don’t expect extensive international support for Haiti coming at any time. Haiti is the international dirty street person sleeping on the sidewalk ignored by the passers-by.