Family lives in a rickety bus in Santiago 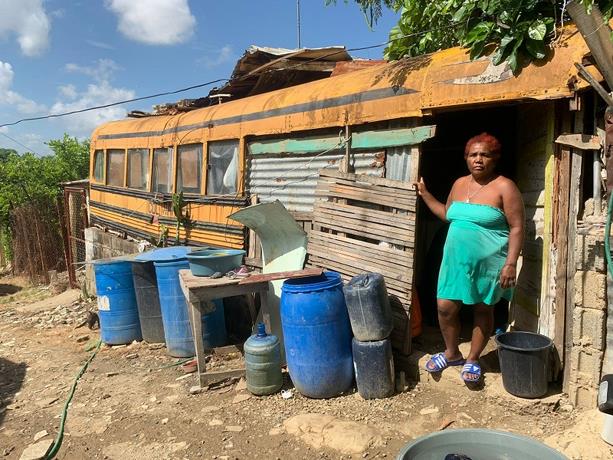 Santiago, D.R.
A family of minimal economic resources that lost their home after the landslides that occurred in the vicinity of the Jacagua River, in the sector of Parada 7, in Ingenio Abajo, on the Joaquín Balaguer highway in Santiago, has been sheltered for more than a year in the chassis of a bus that they have converted into their home, waiting for a helping hand from the government to be able to move to a more dignified space.

The family of six members, including an 81-year-old woman with health problems, a married couple, and three of their children, live in extreme poverty in an improvised space in this community belonging to the Santiago Oeste municipal district.

Mrs. Bernarda Marte, who does not work, takes care of her mother, an 81-year-old woman. Her husband, Francisco Jiménez, is the only one who works in a free zone and said he earns very little, only enough for basic “household” expenses.

After a brief tour of the interior of what Bernarda Marte and her family use as their home, journalists from Listin Diario were able to see the little space they have, which must be distributed as follows: a kitchen with a stove, a small table, two beds, where everyone sleeps, a small closet, all those mentioned above, in a cramped space that prevents whoever is inside from moving easily.

Bus shell
To expand the structure of the bus shell and thus have more space, the family placed some sticks standing in lines of blocks and scraps of old wood, cardboard, and other utensils to add another room.

Bernarda Marte took advantage of the visit of the press team of this newspaper to make a call to the local authorities, as well as to President Luis Abinader, to help them to find a more noble house.

Marte also asked for work for her and her children so that she could help her husband Jimenez in the purchase of medicines for her sick mother.

Solidarity from neighbors
Mrs. Marte thanked her neighbors’ extraordinary gesture of solidarity because the space of the abandoned bus that today serves as her shelter was lent to her by one of her neighbors.

Other people in the area also took the opportunity to denounce to the competent authorities the constant landslides that occur in the area.

América Martínez explained that about 14 houses built near the Jacagua river have collapsed in the last few years and that others are on the verge of collapse.

The reality of the family environment

The arrival of aid.
Bernarda Marte said that people have visited her to know her reality and helped her, many of them with cash, others with food, medicines, and clothes.

They are expanding the space.
An entity that she did not want to identify gave her 30,000 pesos in cash to be able to expand the space and be more comfortable.

There are lots of people living in ‘rickety ‘metal shacks throughout the entire country. Canadians do not understand why because tourism in the Dom. Rep. is so successful.

This family living in the rickety bus is not the exception. There are thousands upon thousands of families in similar conditions. If foreign visitors to the country venture away from the beaches they will observe various levels of living conditions, many of which include the rickety. The poor do need proper and clean humble housing at minimum.

Gov’t needs to thinks outside of the box about what it can do to assist these people.

If you gringhoes would stop living in our country illegally, it would be cheaper and affordable for our people.

Be thankful that there are ‘gringos’ whose generosity help out Dominicans in need. Each year I spend $10,000 Cdn in my local Dominican community where I live for 5 months. Over the years I have given at least $25,000. helping out your fellow citizens. How much does the average Dominican contribute and what do you do for your community?

Zilch…zero…we couldn’t get 1.000 pesos during pandemic to help deprived people…

It is not about what you “get” to help. It is about what you already have. It could be services to tighten a loose door, clean a stove, donate a used chair, or run an errand.

Daily reminder of the marginalization and demographic explosion that this democracy has yet to show it can handle. And then you have illegal settlements. The picture reminds all of us that there is lot to be done. Sure, the poor are fighting diseases, parasites, and hunger. But the oligarchy and the government in DR continue to ignore (they laud their economic numbers and praises they get from abroad for hosting millions of illegal foreigners).
Yet, the country doesn’t distribute the wealth that gets from its proximity to the US appropriately. The shame is on democracy and capitalism for empowering the oligarch more and more.