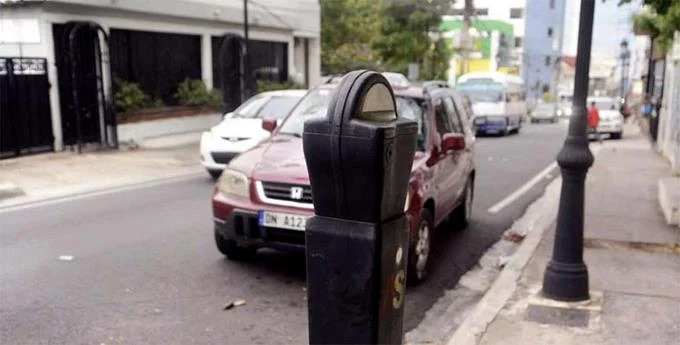 Santiago, DR
The regulated parking system, better known as “parking meters,” has become a decorative instrument in the Historic Center of Santiago after its operation was declared unconstitutional in February 2010.

Each stretch of the city’s main streets, such as 16 de Agosto, El Sol and San Luis streets, has up to four of these devices per corner.

“It seems they should remove them mainly for the blind passersby. They don’t have any protection, and they can trip over this”, commented Germania, a book seller waiting for customers around one o’clock in the afternoon last Thursday.

Other citizens consulted consider that over the years, this device has become a “nuisance” for many residents and that its reuse would mean returning to the stress it caused them years ago.

Despite the chaos and “headache” of parking a vehicle in the Historic Center of this city, businessmen agree that parking meters should be reinstated.

“I believe that well-organized parking meters work. This is a solution that with an optimal administration would allow rational use of the spaces and a greater order and security,” guaranteed Ulises Rodriguez, current director of the Center for Industrial Development and Competitiveness (PROINDUSTRIA).

For his part, architect David Tejada argued that in the beginning the idea was acceptable; however, its implementation in the city was not the right one because many of the parking meters did not work properly.

“Collecting money through this machine caused people to last less time parked. For that reason, they were solving their errands quickly in order to pay less,” Tejada explained.

He also stated that parking meters should be reinstated but need to be replaced by more modern and functional ones.

“For this, it is necessary to provide the population with a better road education, so we will be able to relieve the roads a little and the occupation of parked vehicles will be released more efficiently, ” said the architect.

However, he understands that while they do not work, a better option would be to dismantle or recycle them somehow.

On the other hand, Julio Corral, consultant of the Strategic Plan of Santiago, in the area of Environmental Sustainability, Land Use Planning, and Climate Change, points out this resource for security and order is provided at the time as positive.

“It was a good experience. Let’s remember that the parking meter was a way to generate resources for the municipality itself and implied order in the parking system of our city,” said Corral.

He also commented that he finds the Historical Center “interesting” if it is not applied in other parts of the city, as this could generate “a great conflict.”

The parking meters began to operate in 2007 in the historic center of Santiago, becoming the first Dominican city with this regulated parking system.

This project arose from Santiago institutions: businessmen and sectors of the citizenry concerned about the loss of order, safety and road access activities in the center of the city.

According to studies by municipal departments and drivers’ organizations, more than 2,000 motorized units, including cars, motorcycles, bicycles, and even tricycles, enter the urban area of this locality every day.

In June 2010, the plenary of the Supreme Court of Justice issued a sentence annulling the contract between the Municipality of Santiago and the company Blue Parking Caribbean to control the parking meters, a verdict that is still in force today. Since then, the parking meters have become part of the visual structure of the city, even though they are not operating.

The meters should be removed. It is not an essential matter, They may not be collecting money, but at least their positions prevent cars & trucks moving onto the sidewalks to obstruct foot traffic. There are more compelling affairs on the Santiago list of things to do, such as its fire station construction paralyized for 12 years that needs to be rebooted.

The Dominican Republic is a lawless society, whether you admit it or not; when it’s easier to break their political contract and abuse their power for personal gain, the country’s government is no longer serving its citizens. Corrupt law enforcement and worst governance determine if a system of government is worth saving. Poor public education determines if a system is worth saving. A lack of hope for future opportunities determines if a system is worth saving. The Dominican Republic is not the only country. in a steep decline, even prosperous counties are going through this transformation due to corrupt leadership and greed. Only the people can change this, but this may never happen because they are consumed by design on daily survival and their lack of focus.