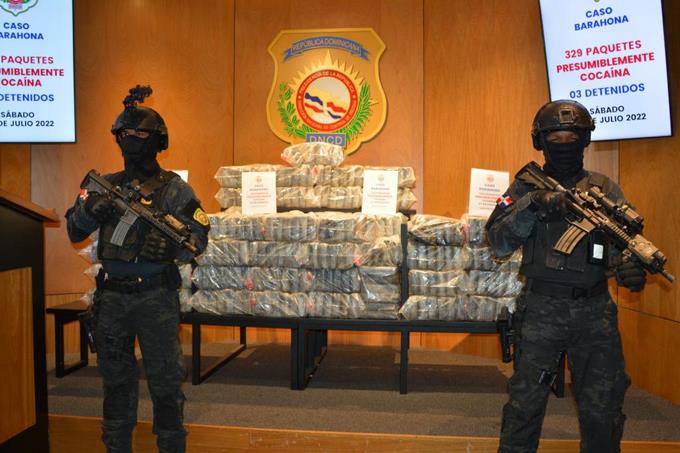 The National Directorate for Drug Control (DNCD) reported this Sunday that the 329 packages seized on the coast of the province of Barahona through a joint operation with the Navy had a total weight of 337.12 kilograms.

This information shared by the anti-narcotics entity was attributed to the National Institute of Forensic Sciences (Inacif) analysis, also adding that it was confirmed there that it was cocaine.

For the case, the authorities keep two Dominicans and one Venezuelan under arrest while the investigations are expanded to determine if others are involved.

The operation in question began after the authorities received an alert, for which they activated the tactical and reaction teams, initiating a pursuit of the occupants of a speedboat who intended to introduce an undetermined amount of controlled substances into the country.

Later, members of the Navy and DNCD agents managed to intercept the vessel, some 23 feet long, several nautical miles south of the coast of the municipality of Enriquillo, where they confiscated 13 bales containing 329 packages of the substance.

The blue and white boat, without name or registration, with two outboard motors of 75 and 65 horsepower, would have reached the Dominican coast from South America.

In the joint operation, which lasted more than 15 hours, two fuel jugs, ropes, a tarp, life jackets, water, food, and hydrating drinks, among other evidence, were also seized.

This administration is showing that it’s determined to put up a fight against drug trafficking, local and international.