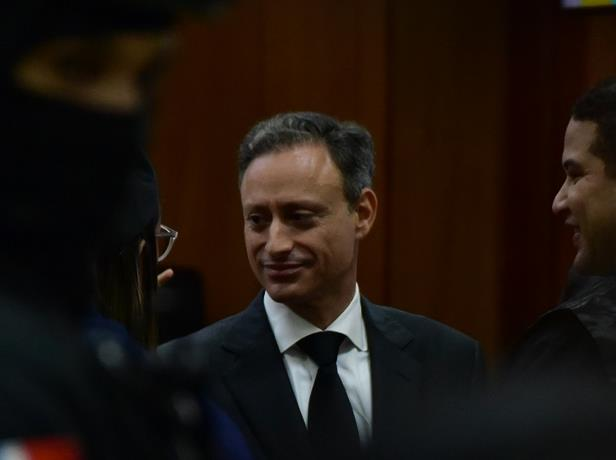 Jean Alain Rodríguez is being held in Najayo./LD

Santo Domingo, DR.
The former Attorney General of the Republic, Jean Alain Rodriguez, built with money from the institution a perimeter fence on a land of his property, which was acquired in his last operation with money from the Attorney General’s Office.  The land is located on the Circunvalación Avenue of Santo Domingo, near the intersection of Villa Mella-Yamasá.

This is stated in the indictment filed by the Specialized Prosecutor’s Office for the Prosecution of Administrative Corruption (PEPCA) against the former prosecutor and the other accused in the corruption scheme in the Medusa case, whose file is in the hands of Judge Amauri’s Martinez, of the Third Court of Instruction of the National District to hear the preliminary trial.

According to the accusation, the said land, of about 30 thousand square meters, was also fraudulently acquired by Alain Rodriguez, in one of the last illicit operations committed by the accused, imprisoned in the Najayo jail.

The accusation highlights that Alain Rodriguez paid the cost of the construction of the said fence through a fictitious invoice in favor of Marizan Ingeniería, Construcción y Bienes Raíces S.R.L, which stated that it was for the repair of bathrooms of the Attorney General’s Office. The file of more than 12 thousand pages indicates that this was the last of the illicit operations in which the alleged corruption scheme directed by Alain Rodriguez used the company Marizan Ingeniería, Construcción y Bienes Raíces S.R.L.

The engineer Grandersio Rafael Marizan Ubiña, established to the Public Prosecutor’s Office that Antón Casasnovas Nolasco asked him to make a budget and an invoice, establishing items corresponding to the repair of bathrooms in the Attorney General’s Office. Still, the reality is that said money would be used to construct the perimeter fence near the Villa Mella-Yamasá intersection.

Send to trial on the merits.
In the accusation, consisting of more than 3,000 pieces of evidence and 400 witnesses, the Public Prosecutor’s Office asked the judge to set a hearing to hear the conclusive act of the accusation and the request for the opening of the trial against the accused.

Likewise, that the accusation presented by the Public Prosecutor’s Office be fully admitted, with all its elements of evidence, against the individuals and legal entities, object of the present accusation and consequently, to issue an order to open a trial against the accused.

Also, the coercive measures imposed on the defendants should be maintained through resolution No. 0670-2021-SMDC-00952 since these measures guarantee that the defendants will not evade the criminal process for serious crimes.

The man, so arrogant he held himself above any accountabilty for his actions.. He used the power of his chair to rob the people. Lock him in his cell and throw away the key.