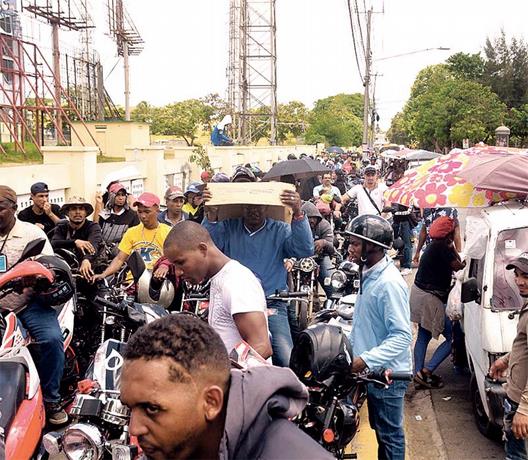 Santo Domingo, DR
With the incandescent sun burning down on their backs, around 400 motorcyclists gathered at the Institute of Transit and Land Transportation (Intrant) to register their motorcycles while complaining about the conditions they have been subjected to in the process.

“I woke up here taking fight, sun, hunger, and everything. I have not been able to pee because there is not even a bathroom, you can’t move, and we breathe with each other; this is not for the people,” complained Juan José.

A long queue delimited by a rope, while as the observation progresses, it gets longer and longer, is what can be seen outside the Intrant offices.

Along the same lines, other people in the long line to register their motor expressed that the “slowness” with which progress is being made is shocking.

“This is very slow. I have been here since six in the morning and look where this is going, in the same place,” said Arturo Perez.

Seeing that journalists of the Listín Diario were recording them, they asked to be helped and that the calamities of the plan be solved for the people who are still to be registered.

In a few minutes, a black cloud spread its waters towards the ground and, with its drops, made some of those present abandon the line that had cost them so many hours and sacrifices to make, but others remained firm in the face of the rain.

The Intrant spokesperson said that what can be felt concerning the Registration Plan is a question of “leaving everything to the last,” which he described as typical of Dominicans.

“Many motorists had not gone to the registration plan, because of this many centers have been overcrowded and this makes the process take longer,” reported Valdez Jáquez.

When questioned about the alterations that the motorists go through, the spokesman affirmed that “the truth is that we would not want them to be in these conditions, but the plan has been in place for a year and two months, during all that year those who are there did not go, all these situations are due to the overcrowding.”

He reiterated that the Dirección General de Seguridad Tránsito y Transporte Terrestre (Digesett) will act drastically with those who do not comply with the traffic regulations.

A registered driver who makes modifications such as the color or design of the motorcycle must return to renew this data to Intrant for a cost of 200 pesos since he is stopped and does not have the updated status can be fined or retained.

There is no closing date for the plan.

It fails me to understand the Dominican mentality about doing tasks in a timely manner. Many do what is necessary at the last moment and then complain they are being abused by the process. The motoristas have habitually excused themselves from their responsibilty to register their motos because of no money, no time to do it, or why should I mentality. Yet, they have money available for smart phones, to buy loto tickets, and purchase fuel – no problem; money to register, no no no. The government announced a long time ago it required the motos to be registered, reducing costs as an incentive to bring it about. Most wait to the last minute.

Maybe government should set up a daily raffle for smart phones and lottery tickets at registration points for the motoristas wanting to register.

Any idea where to register in Punta Cana?

Not sure now because of lack of published information. Previous location was at Plaza La Hermanidad City Hall, Veron.