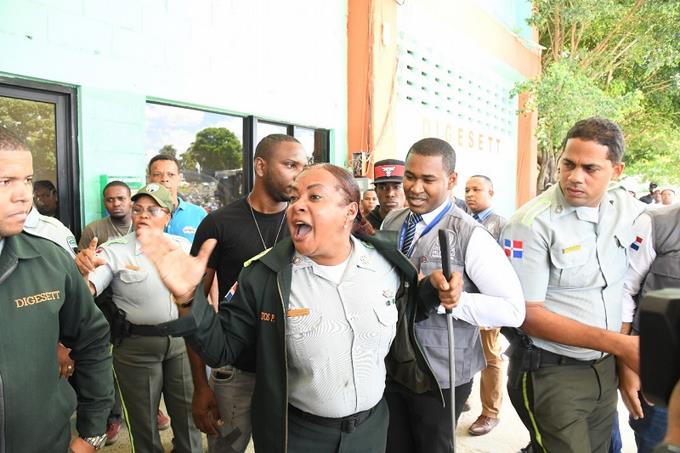 Santo Domingo, DR.
Last June 23, the prosecutor of the National District, Rosalba Ramos Castillo, announced that the file was ready to file charges against colonel Ysabelita de los Santos Perez and six other subordinates accused of the aggression against the Ombudsman and media journalists.

This after two attempts by prosecutor Santa Reyes of the Internal Affairs Department of the Public Prosecutor’s Office to obtain an arrest warrant against those involved before the Coordinating Office of the Courts of Instruction of this jurisdiction, which rejected the request.

On that occasion, the prosecutor had expressed that in the next few days, she would file the accusation against the former manager of the Vehicle Retention Center “Canódromo El Coco.” The others were accused of aggression against Pablo Ulloa, the Ombudsman, his assistants, Listín Diario, and CDN journalists, who were robbed of cameras and a cell phone, whose data was erased.

Coronel in the front row

The promise of measures

In addition, the prosecutor informed on that occasion that, together with the indictment, coercive measures would be requested against those accused of committing a cyber crime by deleting information from a cellular phone of the newspaper Listín Diario.

Last April 11, police under the command of Colonel Ysabelita de los Santos Pérez beat and insulted the Ombudsman, Pablo Ulloa, his assistants, and journalists of Listín Diario and CDN, who were robbed of cameras and a cell phone, which had its data erased.

The Ombudsman went to visit the center, together with representatives of the media, motivated by the reports published by Listín Diario, in which he laments the conditions in which thousands of vehicles are occupied by their owners.

After the incident, Digesett personnel took away the journalist’s cell phone of Listín Diario, Lourdes Aponte. It erased the video and photographic files, which recorded the happenings at the Canódromo El Coco, whose equipment was later returned to this newspaper, already reset or zeroed.

From its history
The Vehicle Retention Center or Canodromo “El Coco” was, as its name says, a land prepared to house dog races. Still, over time it passed into the hands of what is now the General Directorate of Traffic Safety and Land Transportation (Digesett).
It was inaugurated in 1986 in the same place Monumental Avenue is today and was intended to be a tourist attraction.