Large migratory flows to the Dominican Republic are predicted 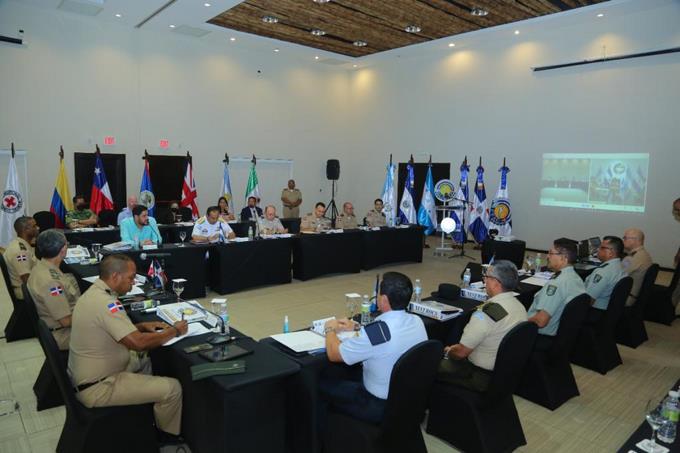 Participants in the Conference of the Central American Armed Forces. External/

Santo Domingo, DR.
The Superior Council of the Conference of the Central American Armed Forces (CFAC) warned about the situation of instability and insecurity in Haiti and pointed out that the crisis in that country is creating conditions for the generation of large migratory flows to all the countries of the region and particularly to the Dominican Republic.

The alert is part of the conclusions of the CFAC Superior Council meeting held in the Dominican Republic and hosted, in his capacity as Pro-Tempore President, by the Dominican Minister of Defense, Lieutenant General Carlos Luciano Díaz Morfa.

In the document, the CFAC also declared drug trafficking as “the main common threat to regional security” and proclaimed the need to strengthen the execution of “forceful actions” to maintain control of this scourge and other transnational threats in the land, air, and maritime spaces of the binding countries.

The declaration also warns of the “impact of risk to the security of the region” derived from the situation of conflict in the world and the restrictions which, although to a lesser extent, are still in force due to the Covid-19 pandemic, “which have generated severe consequences in the world economy and which significantly affect the Central American region and the Dominican Republic.”

Facing threats
The signed document also recognizes the efforts of the Armies and Armed Forces that carry out territorial control and public security tasks in the linked nations, with positive results in integral plans against terrorism, organized crime, and related activities of the CFAC, “thus, raising the existing security indexes.”

At the meeting and signing of the document were the Minister of National Defense of the Republic of Guatemala, Major General Henry Yovani Reyes Chigua; the Brigadier General Chief of the Joint Chiefs of Staff of the Republic of El Salvador, Miguel Ángel Rivas Bonilla; the Secretary of State in the Office of National Defense of the Republic of Honduras, José Manuel Zelaya Rosales, and Brigadier General Juan José Membreño López, Head of the Directorate of Operations and Plans of the Nicaraguan Army, representing the Commander-in-Chief of the Nicaraguan Army, Army General Julio César Avilés. Also in attendance were general officers and senior officers representing the observer countries accredited to the CFAC, including Argentina, Brazil, Belize, Canada, Colombia, Chile, France, Germany, Mexico, Spain, Taiwan, the United Kingdom, and the United States.

More participants
Also in attendance were delegates from cooperating organizations such as the Inter-American Defense Board, the International Committee of the Red Cross, the Spanish Military Emergency Unit, and the Central American Parliament.

The meeting is the first face-to-face meeting of the CFAC since the Covid-19 pandemic was declared. The participants reviewed the results of activities carried out in the first semester of this year and learned about the preliminary General Schedule of Activities for the year 2023.

I can see more reports from the US and the UN against DR for addressing the Haitian crisis.

DR set up some camps and help on the hatian side of the border. to help keep them there rather than coming in