“I was mugged two corners away from the detachment.” 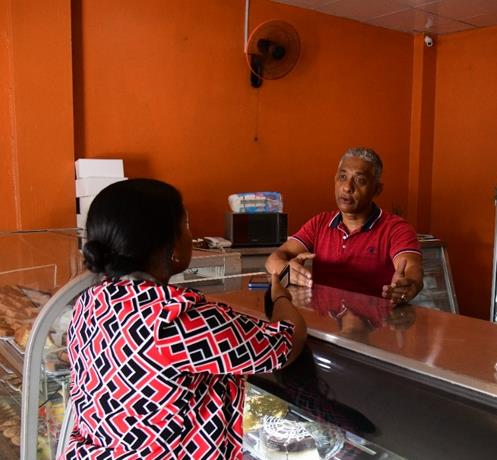 The owner of a bakery describes the situation in his sector. Jorge Martinez/RB

Santo Domingo, DR.
When approached by citizens in different points of Greater Santo Domingo regarding citizen security and the role of the members of the National Police in their neighborhoods, they explain that it is almost nil and that delinquency is gaining more and more ground in society.

“Security, what do you eat that with? Here the people here after 6:00 in the evening cannot go out to the grocery store and the policemen who show up in Villa Juana are there to pressure the business owners to get their hands wet,” said Jairo Perez, a resident of the sector.

He explained that the mayor of the National District “enlarged the sidewalk to make a boulevard for people to walk and that only dogs and cats use it because the thieves do not let people go out.”

In particular, several owners of premises of different origins denounced being harassed by members of the National Police to pay tolls for protection when their fundamental duty is to serve as a national safeguard for all citizens on an equal footing.

Several residents of Villa Juana emphasized that even though the police station is only a short distance away, this “means nothing” since the uniformed officers who work there do nothing for the community, sinking deeper into crime every day.

“I was mugged two corners away from the police station. When I went to see what could be done for me, what they did was that when they described that some minors assaulted me, they made fun of me, alleging that how such a big man could allow himself to be mugged by some little boys,” declared Tirso Martinez.

In the María Auxiliadora sector, the merchant Sixto Vásquez told how the cameras of his business captured a thief trying to steal the batteries of his vehicle.

“I have the photo of a delinquent who was about to take the batteries and could not do it because I have some chains, and when he saw that the robbery had been stopped, he left. I did not go to the Police because they never find anyone, that was a waste of time,” declared Vásquez.

There the residents reported that motorized crime is “rampaging” in the area, situations that occur in front of the law enforcement authorities, and they turn a blind eye and do not do their duty.

“On this sidewalk where you interviewed me they snatched a wallet from a lady who was coming out of Moscoso Puello, right in the face of two military men and the same thing you did for her, that’s what they did: nothing,” said Jesus Matos.

Santo Domingo East
For Santo Domingo East, the events are not separate from the outrageous reality that the other sectors of the Capital are going through since there are assaults, robberies, and theft of belongings, among other criminal motives.

“This area is quiet, but if you go to Las Americas and Venezuela or Villa Faro, the story is different. A small group of armed young men stop in a motor and you have to give them what you don’t have, if they want to, they leave you alive”, revealed Sergio Olivares, a resident of Los Mameyes.

Lack of lighting
Another incidence evidenced by the ease of crime by antisocials is that there are spaces that are not sufficiently illuminated and are transited by a large number of people daily, and this serves as an opportunity for thieves to seize the objects of those who come to study or earn a decent living.

The operation
Last June 3, President Luis Abinader sent the military to patrol the neighborhoods with the National Police.